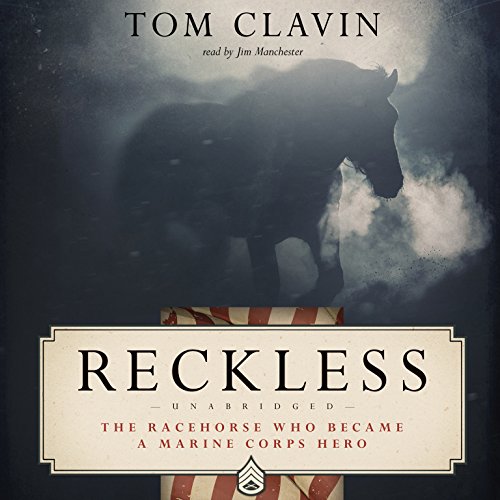 By: Tom Clavin
Narrated by: Jim Manchester
Try for $0.00

From the racetracks of Seoul to the battlegrounds of the Korean War, Reckless was a horse whose strength, tenacity, and relentless spirit made her a hero among a regiment of US Marines fighting for their lives on the front lines.

Her Korean name was Ah-Chim-Hai, meaning Flame-of-the-Morning. Af our-year-old chestnut-colored Mongolian racehorse with a white blaze down her face and three white stockings, she once amazed the crowds in Seoul with her remarkable speed. But the star racer was soon sold to an American marine and trained to carry heavy loads of artillery shells up and down steep hills under a barrage of bullets and bombs. The marines renamed her Reckless.

Reckless soon proved fearless under fire, boldly trekking alone through the fiery gauntlet, exposed to explosions and shrapnel. For months, her drive and determination kept the marines' guns blazing, while inspiring them with her singular charm. During one day of battle alone, she made 51 trips up and down a crucial hill, covering at least 25 miles in the heat of combat. On some of her uphill treks, Reckless shielded human reinforcements. The Chinese, soon discovering the unique bravery of this magnificent animal, made a special effort to kill her. But Reckless never slowed. As months passed and the enemy grew bolder, the men came to appreciate her not just as a horse but as a weapon and, eventually, as a fellow marine.

In Reckless, Tom Clavin, national best-selling coauthor of Halsey's Typhoon, tells the unlikely story of a racehorse who truly became a war hero, beloved by the US Marine Corps and decorated for bravery. A moving reminder of the unbreakable bond between people and animals, Reckless is a powerful tale of courage,survival, and even love in the face of overwhelming odds.

What listeners say about Reckless

Hero's are not always people!

What made the experience of listening to Reckless the most enjoyable?

The fact that this is a real horse, real people and a deadly war sobers one to understand how special this horse was under the most difficult conditions - what a hero Reckless was!

Reckless - a heart of gold and the courage only few of our greatest military heros possess.

Battle scenes where Reckless transports ammunition without a handler.

The awards Reckless received and the review of her accomplishments.

Thank you - wonderful story, a must for any military reader and equine lover!

What a wonderful story.

This is a great story Tom Clavin and Jim Manchester did a wonderful job.I truly would have liked to meet Reckless. What an awesome horse.

I really enjoyed this one. @ times you're rooting for Reckless! Yet it also meets my requirements for learning something new.