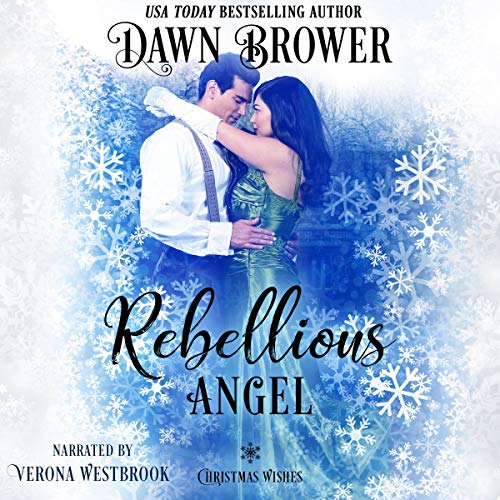 By: Dawn Brower
Narrated by: Verona Westbrook
Try for $0.00

Miss Angeline Marsden has a defiant nature and makes no apologies for it. Her parents would prefer she didn't participate in the local suffragette group, but she believes all women's voices should be heard. After she finds herself in trouble she can't extricate herself from, she has no choice but to turn to the one man she's always loved and who treats her like a sister.

Much to the dismay of Lucian St. John, the marquess of Severn, he's always been drawn to Angeline. She's his one irresistible temptation; however, she's also his best friend's sister and off-limits. When she finds herself in a mess of her own making, he comes to her rescue and offers to marry her.

Marriage is the last thing either of them expected, yet the one thing they both wanted but were too afraid to ask. Will they find a way to open their hearts to each other and obtain their Christmas wish?

Everyone recognized the love between Lucian and Angeline except Lucian and Angeline. Fear of being hurt, new found recognition of feelings, a time period when women’s rights are making women militant and failure to communicate nearly cost Lucian and Angeline a future.
Well written, with wonderful inner thoughts that make you hope the couple doesn’t separate out of ignorance. Thankfully Lucian is determined to keep Angeline and once he realized his feelings, his thoughts are so sweet and endearing.
A wonderful narrator who keeps me listening and doesn’t detract from the story She sounds a little old for the 21 years old girl, but not enough to be a bother.
Would believe, all the books in this series would a treasure...romantic, sweet and HEA. Wonder who Alexander loves? (Angeline’s brother) perhaps found out next book.

I totally loved this story, two people love each other but one person stands between them. She has given up hope that he will ever be hers, he treats her like a sister. He loves from afar wanting the one woman who is off limits. There are times he wishes she wasn’t his best friend’s sister. She does seem to get herself into trouble voice her options about women’s rights. Wanting her voice to be hear she finds herself in one big mess, he stands on the sideline watching it all go down, unable to reach her he does the next best thing but there are some demands he will make, will she be willing? He leave her no choice, what follows is a cute, fun loving story that takes your breath away.

The narrator is great she brings emotion, excitement to the story giving wonderful character voices, just the right emotion, pausing just enough to let you take it all in. Her male and female voices are delightful, you always know who is talking and what they are feeling. There are no background noises, no breaks, no volume changes just a good listen you get lost in.

Angeline and Lucian have known each other forever. They have feelings for each other, but neither wants to admit it. When circumstances put them together, is it possible they will get their Christmas wish?

A sweet romance with interesting characters. Both the writing and the narration were well done.

I loved the Marsden series so I am always happy to read/listen to anything that involves this remarkable family. I’ve lost bed watching the family grow and seeing the family traditions carried on with this third generation. I felt true grief to hear of Thor’s passing, like his family I thought he was invisible and would live forever. I felt I had to stop the book to deal with the grief before I could continue. Angeline is exactly what you would expect from Thor and Pieretta. Strong, stubborn, willful and a need to make a difference. She’s looking be Lucian her entire life. Lucian is handsome,caring and stubborn and has quite the challenge is convincing Angelina they should be married. Very enjoyable,sad about Thor but definitely recommend. Verona Westbrook does an excellent job with the narration

There really didn't seem to be much of a Christmas feel to this book until the very end. I thought Angelina and Lucian's relationship was given plenty of background detail. Since we see from both of their points of view, we get to experience how they both feel about each other and can somewhat predict how things are going to play out. I thought it was interesting how the solution to getting Angelina out of trouble for standing up for women's suffrage was to get engaged. I can't help but enjoy a story that ends in a Happily Ever After.

I thought the narrator did a pretty good job on this performance. There could have been better editing, overall, I think her voice added to the setting of the story and gave it more of a traditional feel that captured the timing of the story well.

Rebellious Angel: Marsden Descendants was interesting enough. Was thinking it was going to be different kind of story. I enjoyed it enough. There may have been a problem with the sound. I was given this audiobook in exchange for my honest review. Not bad.

Can I say spoiled?

I got this story via audiobook boom and this is my voluntary review. The heroine of the story was spoiled and the hero was strange. I have not read any of this author's books but this one was developed well with several plot twists. Love from childhood into adulthood is rare yet it was presented well. The hero is aware of her yet knows she is off limits until she comes of age and gets herself into trouble. He saves her but that is not the end of the story. The narrator was good and did not take away from the story.

Rebellion at its Best!

I am very sure that if you knew the young Angeline, who was crazily in love with her friend's brother, Lucien, (and this for more years than she could remember, but she didn't know how he felt), then you would find her behaving in just the same way that she does in this story. Rebelliously!
Lucien, though he is becoming aware he is seeing her differently of late, won't admit to her nor to himself that he is in fact in love with her. The man even marries her to save her from herself - or so he tries to tell himself!
The not-knowing is driving them both crazy and Dawn Brower has written many interesting and very funny scenes into her story which make this book a pleasure to read.
On top of that Verona Westbrook has narrated the story using some very interesting voices and this made it a pleasure to listen to.
I am happy to recommend this book or audio book to you so that your spirits can also be lifted.
I received and listened to a free copy of the audiobook and my review above is given voluntarily and is unbiased.

Poor Angeline never admitted her crush. When she gets herself into a predicament she suddenly found herself engaged to her crush. She is saddened that it’s all for show to save her, but she wishes it was true.

such a beautiful love story! so much passion, fear, and misunderstanding! It is far more realistic and so full of love!