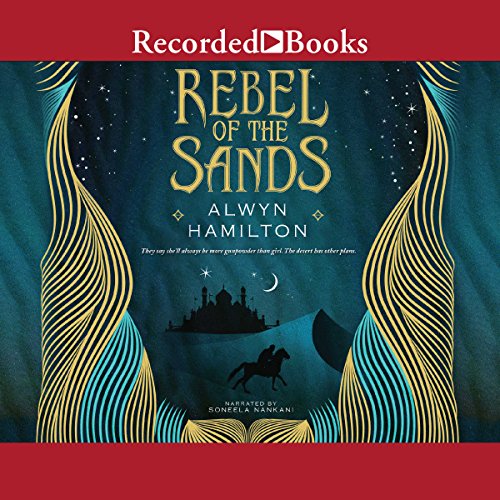 Rebel of the Sands

By: Alwyn Hamilton
Narrated by: Soneela Nankani
Try for $0.00

Sixteen-year-old sharpshooter Amani Al'Hiza never doubted she'd escape the miserable one-horse desert town where she was born. Getting out had always been the plan. But she never figured she'd wind up running for her life - with a boy wanted for treason.

When Amani enters a disastrous shooting contest against Jin, a rakish foreigner, she has no idea of his connection to the ongoing war between the ruthless Sultan of Miraji and his exiled son, the Rebel Prince. But soon the pair are fleeing across a desert crawling with vicious bandits, terrifying ghuls, and powerful djinni, and the sultan's army is getting closer every day.

When Amani and Jin stumble across the ruins of a town destroyed by an unearthly fire, it's clear the war's stakes are higher than either of them realized. The Rebel Prince has a secret weapon, and now he wants Amani to join his revolution.

All Amani ever wanted was to escape the desert and find adventure - but will the desert let her go?

What listeners say about Rebel of the Sands

I love the story and the details were amazing as the story was being read. It made sense to have a female narrator but her voice was a little irritating as she kind of spoke in a high tone at times but luckily the writing was on point with descriptions and well thought out details. I love the story line and characters... im highly recommending 🤓

Hard to Believe this is YA!

I picked this book up on a whim because I'm always hungry for a book in a much less traveled setting like a desert. The world of fantasy also does not have enough cool gunslinging gals kicking butt and taking names!

I had no idea this was a YA book because that usually has a certain flavor to it where you have a lovestruck protagonist getting caught up in the romance of some mysterious new boy and sticking it to the authority. While all those famliar tropes appear in one form or another, I felt like there was plenty else going on to keep us interested. These plot points happened naturally rather than feeling forced like other YA stories I've experienced. One of the best elements of this book is also the fantastic Arabesque world of folklore and fairy tales mixed with a refreshing new take! I love the mythos Hamilton has built and expanded upon and look forward to more in the sequels.

Amani's quest to forge her own way in this fascinating world kept me invested and I love the fact that she's not altogether likable at times. She's brash, headstrong, and world-weary. I'm looking forward to seeing where her journey takes her in the sequels and how she develops as a heroine coming into her own!

Performance:
Soneela Nankani has a pleasant voice, though perhaps a bit flat and unemotoinal at times, which is why I ranked Performance 4/5. Not a bad performance at all, however, and I'm hoping perhaps I'll get more used to her for the sequel books!

Pro's:
The writing was beautiful. The way that Hamilton describe things just made me want to highlight all the passages. Especially when listening to it because Soneela Nankani has a beautiful storyteller voice that brings the images more real.

The Dev’s Valley ran like a wound deep into the skin of the desert, a shallow river exposed vein at the bottom. -189

This book gripped me from the first because I loved how tough Amani is and how hard she worked to changing her life. She wasn’t going to be like all the other girls in her small town. Amani taught herself how to shoot and raised money to get out of her uncle’s thumb and I have to give her props for that. The smart mouth on Amani and how quick she is with her comments while having a smile on her face. From the first paragraph, I could tell that Amani is going to be a straight up badass and I was right.

&amp;quot;You stole it first. If you hadn’t set such a bad example, maybe I would’ve never stolen your broken compass.”-36%

The humor between Jin and Amani is so adorable. They both are quick with a comment and are sarcastic which I totally get behind.
“You’re too smart to play dumb, Bandit.”
“You’re mistaking my playing dumb for my thinking you’re an idiot for wanting a beat-up compass”-36%

“I don’t mean to worry you and all,” I said, trying to keep my voice calm, “but have you noticed that you’ve been shot?” “Ah.” Looking at him closer now, I could see he was clutching the counter to stay upright. “I’d almost forgotten about that.”-18%


I could predict Jin’s secret so when that was revealed I wasn’t surprise. Jin was supposed to be this mystery who’s that guy type of thing, but it didn’t really work on me. I loved though that he didn’t try to stop Amani from being herself.

However, when Amani twist came I was actual surprised. I probably should have seen it coming, but since I didn’t I had a bit of a shock. Plus, the tag on the cover that says she’ll always be more gunpower than girl. The desert has other plans. Is very true once you read the book.

Disliked:
Something I didn’t like about Amani is her breaking promises. She left her best friend to suffer and promises herself she won’t break another and does it anyway. Which came back to bite her as things like this usually happened. But then when she had the option to leave Jin after he is injured Amani stays with him.

Currently there is no love triangle which is a relief and how it carries onto the second book.
Which because there wasn’t a cliffhanger I can wait a bit before I pick up the next book. Not that I didn’t enjoy the ending, and that there isn’t question I need answered. I just have plenty of books to read currently first.

If Amani was consistent and believable. There is no explaining on how she's a sharp shooter in a society that oppresses women. And then there is the whole fact that Amani was willing to possibly die for a stranger because she feels bad for him, but then she leaves a different guy for dead that had already saved her life twice. It just didn't make character sense, especially since the author didn't take time in the narration to explain why Amani treated these situations so differently.

I thought Jin himself was the most interesting. The least interesting was the lack of details on gun shooting in a book whose synopsis says that Amani is more gunpowder than girl. I dunno, I guess I expected a cool gun element but all we get is bland sentences about the fact that Amani shot her gun.

What does Soneela Nankani bring to the story that you wouldn’t experience if you just read the book?

She made me last longer because if it were me reading traditionally, I would have stopped way sooner.

This is the author's first published book, and it seems to be getting a lot of positivity from most people who have read it so far. I think she has a lot of potential to improve. I loved the premise of this story and I thought she had the right idea about Amani and I thought Jin was charming. I'm sure she will improve.

none of the negative reviews even read this book

I read the book and all the criticism gets explained litterally 3 chapters in. spoilers: she is good at shooting because she practiced a lot and also is a half supernatural being.

I downloaded this book when it first came out and forgot about it until a week ago. Wanting to read something a little different, I picked up Rebel of the Sands and easily finished the book within a couple of days. RotS was a great listen and definitely propelled me to listen to the next two books quickly after. A great series to listen to!

I don't know why it took me so long to listen to this! This is the story I've been aching for for so long. This is not a story of the chosen one, a relief, but the story of a strong willed girl trying to do what's right.

4 stars for narration. She did a good job, although I wish there had been more distinctive voices across the board. I may go back and physically read this one, that's how good it was.

great story line! it's neat to here story's of different countries and cultures. Loved it!

I was happy I found this one. badass female character and good storyline. I'll be reading future installments for sure

One of my favorite books; brilliant narration

I love this series. Our tough as nails protagonist with her mysteries and desperation to break free from the cesspit she was born into. The mythology and many-sided war is engrossing and interesting. It's a special bonus that it's not always easy to see who is "right."

The secondary characters are a delight, too. Each so vivid and fascinating.

Nankani has a beautiful voice and narrates this wonderful tale with brilliance.