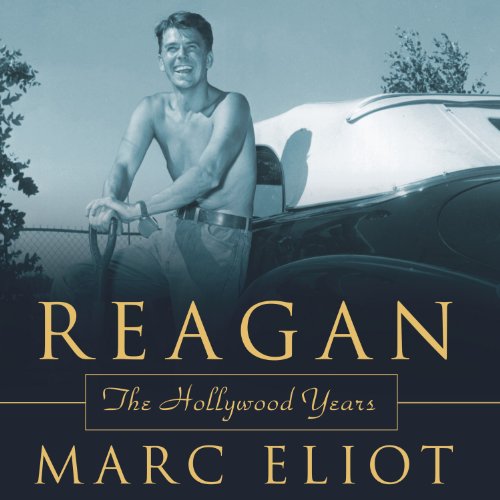 While his presidency has been rigorously examined, Ronald Reagan's early life as an actor and union leader has remained largely unexplored. In this highly entertaining and revealing new biography, acclaimed author and film historian Marc Eliot uncovers Reagan's unlikely and often frustrating career in motion pictures as well as his unpredictable rise to the top of the Screen Actors Guild (SAG). Set against the glamorous and often combative background of Hollywood's celebrated Golden Age, Eliot's biography provides an exceptionally nuanced portrait of the man and reveals the startling origins of the legend.

Covering more than 30 years of Reagan's film and television work, Eliot sheds new light on Reagan's bachelor life, his two marriages, and his two runs as the president of SAG. It also examines his personal relationship with superagent Lew Wasserman, the crucial player who helped develop Reagan's movie-star persona, which would prove essential to his eventually becoming President of the United States.

What listeners say about Reagan

As the description indicates, this is about Reagan's Hollywood years. The real focus of the book is Reagan's early political training: his time on various political action committees during the blacklist era, his presidency of SAG, and his professional relationships with the powerful of Hollywood. The most powerful figure is Lew Wasserman, whom Eliot argues is the basis for the Godfather figure in Mario Puzo's novel, with Reagan as Johnny Fontane, sent into Las Vegas to give the place an air of respectability.

Although it is exhaustive, and occasionally exhausting, on the subject of political committees (you'll hear the name of every member of some committees), Eliot seems less interested in Reagan's movies, although he dutifully covers them. Except for the standout Kings' Row, he doesn't seem to think much of Reagan as an actor, although Reagan was better in some of these movies than Eliot lets on. Elliot does make a good case, however, that Reagan's upright and honest movie persona, honed in a series of B pictures at Warner Brothers, both reflected his personality and helped to shape the politician he later became. He also devotes time to the theme of Reagan's trying to find father figures to mentor him and to provide a model of success that he could emulate.

I stopped reading the Cary Grant book when it was released... tantamount to walking out of a film in progress. Did not care for this author's writing style. Laborious descriptions and excessive sentence grafting... Overall frustration as my intent was (and is) to learn more about Grant and those days in the industry.

Have a similar reaction to the Reagan book - even in audio. Wanting to know more about the life and times yet there is again a distraction from the author's writing style... along with more opinions and unreferenced assertions than desired.

Eliot has obviously researched the material and many parts of the book are useful in the learning sense, but the composition of words to often interrupts my concentration.

Most likely won't be reading from this author again.

This should be a more interesting book to listen to. It is an account of a part of Ronald Reagan's life that little is known about, and includes Hollywood, the studio system, movies and beautiful co-stars.

Instead, the listener is terribly distracted by the performance. Mr. Eliot reads this book like he is absolutely unfamiliar with the material. There are long gaps when he seems to have lost his page, and every third sentence contains the words "author's note". If a professional reader had been engaged, the story could have been more interesting and my mind wouldn't have drifted every time the reader got too close to the microphone.