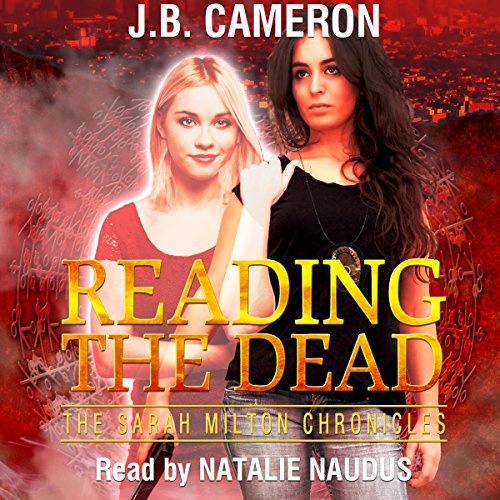 While investigating the brutal murders committed by a mysterious serial killer known only as Raithe, bookish LAPD Detective Sarah Milton is unprepared to have her entire world turned upside down. Innate powers to see the dead, lying dormant since her mother's murder, have reawakened in her after a near-fatal shooting.

Along for the ride is Sarah's irrepressible 13-year-old childhood "imaginary friend", Anna Nigma, a most atypical poltergeist. Amid fears for her sanity, Sarah must come to grips with the realization that her reality is now a mix of the natural and supernatural, where powerful, ancient mystic symbols can grant amazing powers over life and death, and paranormal influence extends even into her current murder investigation.

Forced to hide her abilities from everyone, Sarah, aided by her spectral friend, has no choice but to bring Raithe to justice on her own, before the sinister forces behind his murder spree claim yet another victim.

I loved this story. It has murder, mystery, a snarky ghost, and unanswered questions. I can't wait for book 2. I really liked how each chapter was broken down into sections. This is the first time I've encountered this and found it interesting. I love the narrating style Ms. Naudus. It really keeps the book into perspective for me. I was given this free review copy audiobook at my request and have voluntarily left this review.

I enjoyed the storyline and the growth in the main characters. Anna's voice made my ears bleed, but the rest of the characters were well differentiated. I will likely read the next book rather than listening to it.

Wow, What a Fun Ride!

This was such a fun journey! The story starts off as a fun mystery thriller, but once the supernatural gets involved, the story takes some unexpected directions. The narration was amazing. There were so many fun and memorable voices, and I really felt immersed in the story. I excited to listen to the next book in the series!

2 and a half maybe

This is an interesting concept, but the concept is poorly executed. The writing is stiff and flat. I lost interest and skipped to the end of the book.