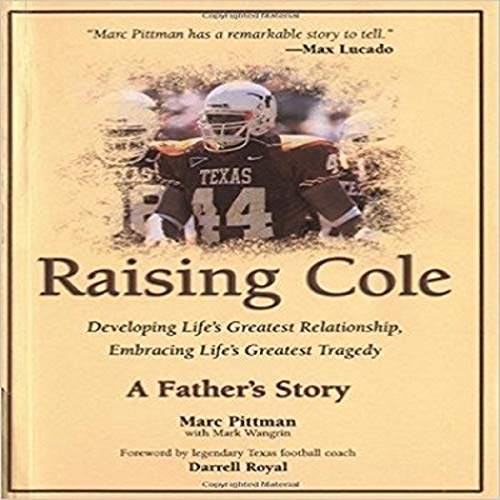 "This book is a roadmap for parents seeking to create a lasting relationship that can withstand the storms of life." (Max Lucado, best-selling author)

Marc Pittman, one of 16 children, is the son of a dirt-poor farmer who remains to this day the only man to ever knock Marc unconscious.

But when he had a son, Marc became the father he had always wanted to have. When seven-year-old Cole asked him about beer, Marc Pittman put down his can and never drank again. He told his boys everything, and they were honest with him in return. They unburdened their fears; told him their dreams; even admitted their sins. Despite the fact that his sons were star football players, they felt no shame in holding their father's hand in public. People told him he was lucky to have the relationship he did with his children, but Marc Pittman knew the truth - it wasn't luck, he worked at it every day.

And then his eldest son, Cole, was killed in a traffic accident on the way to football practice at the University of Texas. This book is the story not just of how Marc Pittman dealt with this tragedy but of the 21 years he lived with Cole and the lessons he learned about being a good father, a good friend, and a good man.

"A must read...Marc Pittman crosses the boundary and stigma of the tough guy and shows that while being very tough, you can also be very compassionate. This book will make you appreciate not every hour, but every second you spend with someone you love." (Mark Gastineau, former Pro Bowl defensive end, New York Jets)