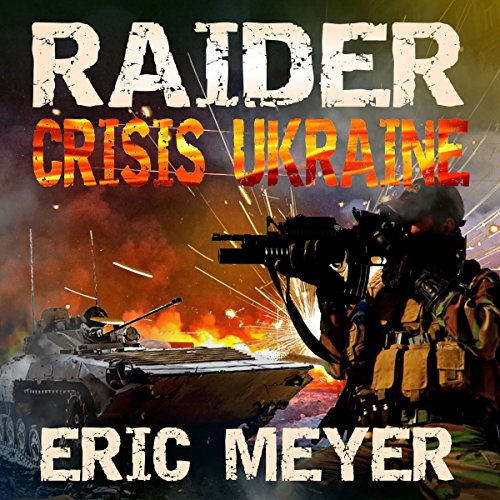 Ukraine. A simmering cauldron of old hatreds between Russia and the West. Separatist rebels have an unlimited supply of guns, and the land is ripped apart by rival factions fighting for supremacy. This is a land where brother kills brother, and women can only watch and weep while a Russian invasion threatens.

On the other side of the Atlantic, a charitable foundation in New York City, established by Alexander Dragan, a mysterious Ukrainian philanthropist. A man who harbors a bitter longing for vengeance. Dragan wants revenge for his family, murdered by two Russians during the uprising in Crimea. The killers have gone unpunished, and now he wants them dead. He recruits troubled former SEAL John Raider, bedeviled by legal troubles, to work for him. The mission - to lead a team of former Special Forces operators into the country and take out the two killers. In return, Dragan will make Raider's problems go away.

Outnumbered and outgunned, the team fights desperately to survive against overwhelming odds inside the chaotic country. Yet the operation hits a further complication. Raider discovers a devastating secret, a plan to plunge Europe into a new and bloody war. The clock is already ticking, counting down to zero hour. The only chance to stop it is to put their lives on the line in a desperate life or death gamble.

Took me a bit to get into the story, but once it got going it was pretty intense. Literally non stop action. The story is constantly moving forward at a fast pace. Getting into Crimea is a whole lot easier than getting out. Things never go exactly as planned. Especially when you don't have all the facts. With things going down hill fast Raider and company finally catch a couple of breaks thanks to a split decision by Raider to free a another prisoner being held in the same prison as their friend.

Story does have flashbacks to past events, which if your not paying attention to the dates can be confusing.

The story takes place during the same time period Putin is putting his plans into action to regain the region of Crimea in the Ukraine. So there are dual story's going on at the same time and how they interconnect with each other.

This is the first time I have "read/listened" an Eric Meyer book. I really enjoyed this one. I'm sure I'll be reading more of his books in the future.

Neal Arango did a pretty good job with the narration. This is the first time I have listened to book narrated by him. Different character voices, easy to follow who's speaking. Pleasant voice. Nice pace. All around good job.

This audiobook was provided by author, narrator or publisher at no cost in exchange for an unbiased review courtesy of AudiobookBoom

What made the experience of listening to Raider Black Ops: Crisis Ukraine the most enjoyable?

All the action made this book the most enjoyable. It wasnt just a few action scenes with a lot of filler in between them.

Yes, the plot was entertaining due to the fact there weren't too many dull moments and you couldnt really see where it was headed next.

My favorite was at the castle. Not only was it a rescue mission for a friend, but freeing other hostages had a impact later in the book.

The torturing of the hostages.

Racist views made it hard to enjoy this book

This was a pretty decent action/thriller. The story was well written and I quite enjoyed the characters. As someone that doesn't know all that much about foreign politics, I was able to follow the story without getting lost so that was nice. Great action scenes. That said, there are lots of highly racist views and comments throughout the book. Mostly against Russians and Muslems. And it just kept getting worse as the book went on. A bright point is the narrator. He is good, pleasant to listen to and good at pouring emotion into the characters. He is however awful with accents. His attempt at a southern accent made me laugh. It did not however detract from the book. In the end I'm conflicted, I liked it but I didn't. Ultimately I would have to say I would not recommend this book and I would not read another from the author.

Snipers, machine guns and bombs oh my! The author has all the ingredients needed: conspiracy, flashbacks, contract killers, human interest, love, vengeance, guns, bombs, bribes, CIA, and more. The narrator does well with the material. I look forward to more in this series. I received this audiobook from the author narrator or publisher for free via audiobookboom in exchange for an unbiased review.

Decent novel, nothing really stood out. I enjoyed the story, but I would only recommend it to those looking to fulfill a specific niche. The story was a generic action one, I've heard it before but better. I don't think it would be worth a credit unless it's a buy one get one.

The narrator was pretty bad too, especially his "southern" accent.

Would you listen to Raider Black Ops: Crisis Ukraine again? Why?

Yes, Very much so

What other book might you compare Raider Black Ops: Crisis Ukraine to and why?

A great spy novel spanning multiple countries. Look forward to the next one

Neal Arango did a good job with the narration. This is the first time I have listened to book narrated by him

A new cold war is coming!

John Raider is an ex seal, now photographer, who is dragged into to a crisis between Ukraine and Russia, that could start a new cold war. This is an okay book, but it is hard to like the main character and some of the decision making is hard to fathom.

First time I have listened to Neal Arango and he delivers a nice performance.

What made the experience of listening to Raider Black Ops: Crisis Ukraine the most enjoyable?

A great spy novel spanning multiple countries. Look forward to the next one.

Good book, but lacks something.

I liked the story, but I felt I had to make myself finish it.