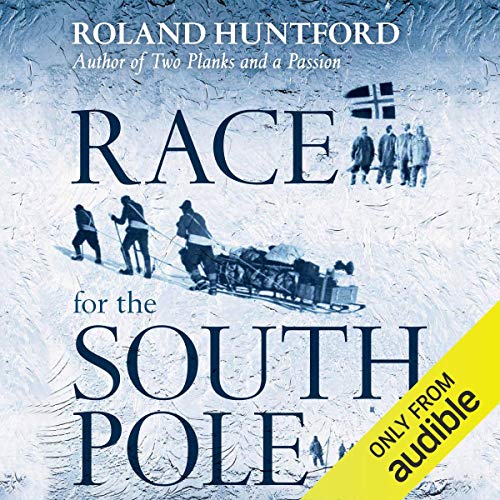 Race for the South Pole

By: Roland Huntford
Narrated by: Bronson Pinchot
Try for $0.00

For the first time ever Roland Huntford presents each man's account of the race to the South Pole in their own words. In 1910, Robert Falcon Scott and Roald Amundsen set sail for Antarctica, each from his own starting point, and the epic race for the South Pole was on. 2010 marks the centenary of the last great race of terrestrial discovery. For the first time Scott's unedited diary entries run alongside those of Amundsen and Bjaaland, never before translated into English. Cutting through the welter of controversy, with the polar journey at the heart of the story Huntford weaves a narrative from the protagonists' explanations of their own fate. What emerges is a whole new understanding of what really happened on the ice.

What listeners say about Race for the South Pole

Narration and story are a delight to listen to. Cannot recommend this book enough.

Full of lessons to be applied in ones own journey

Exceeded expectations.
Bronson Pinchot brings life to the story.
Full of lessons everybody in business and elsewhere should take note of.

I will never listen to another book narrated by Bronson Pinchot. He ruined it. He got lost on the accents, sometimes sounding like an Indian gas station owner instead of a Norwegian. And He should just read the book and not try to make a radio drama out of it. He added his own interpretation and conclusions thru his inflections - which is totally inappropriate. Oh and the 13-year old girl voice? I don’t know why he felt it necessary to apply accents. Just READ the book. He should apologize to Roland Huntford who wrote a great book. I am surprised Audibles let this go out like this.

I love the combination of Amundsen and Scott in a single book but Bronson Pinchot's narration was horribly boring in my opinion. It's very drab and monotone and I'm returning the book because of it. I'll just buy this in paper and read it.

Very interesting to see how the two different expeditions approached navigating the harsh reality of the icy desert that is the polar Antarctic. Team work is essential and so is planning and skill and the side by side diary comparison clearly exposes this. They both accomplished great things but one at great cost - which begs the question of why. Even after over a hundred years later.

My Wife and I really liked this book. If you are interested in books on historic expeditions that rely heavily on real journal entries (primary source) then you will love this book. Also, I thought the narration was pretty great. I especially loved the accents.

A very detailed and convincing argument of why Amundsen beat Scott to the South Pole and survived. Preparation beats pomp every time... I loved this book !

This was an amazingly enjoyable book to listen to. Although sparse, the added narrative was well thought out and engaging, and the diaries themselves were easy to follow. All three explorers who’s diaries are followed throughout the grand majority of the book are unique and bring their own aspects and personality to the listening experience. Each interprets the harsh polar conditions in different ways, which made this book for me a study of psychology just as much as it was a history of adventure and exploration. The narration was overall very well done, and although the accents did slip on occasion they were usually well executed and portrayed the characters speaking very well. Overall I loved the experience of listening to these amazingly hardy men, and I feel much more educated and knowledgeable about many things now that I have finished.

Wonderfully read. The pauses, the intervening sighs, the weariness, the wonder, perfectly captured. 'Luck' as understood differently by two men compares the realist vs fatalist approach. The summary answers the question, 'What are the conditions behind the outcome?' with sting and nostalgia.

This was a great combination of the history surrounding the successful race to the South Pole, and the tragic outcome for the other team. Like in business, many of the things that drew the British team to their demise could have been avoided with open dialogue and a willingness to have a strong plan B. Great stuff

Flipping from and English gentleman to a Norwegian can’t be easy but this attempt is poor. Scott, at times sounds German. Just read the diaries in the same order but without treating us like idiots not able to remember who you are quoting.

Ruined it for me and I almost deleted it but never one to give up, I cracked on through, like a true explorer desperate for it to end.

A tale of sadness

Amundsen got to the South Pole first because he and his comrades were professional in every way. Scott died because he was a product of an Empire which taught professional was a dirty word. Hopefully in our time Brexit does not spawn that.

I nearly didn't get past the first chapter as a result of the slightly cringe accents but I persisted and once I got used to the performance I was hooked. Absolutely fascinating to hear the whole truth of the expeditions side by side. This is the first time I've heard the unvarnished truth of Scott's failings. I find it so enlightening to note how the explorers and "heroes" of the 19th a early 20th century have influenced the British psyche even to this day. Definitely worth listening right through to the end, don't miss the Epilogue.

one for animal lovers

Great listening, great narrator but terrible production. would highly recommend it though, give it a go

More than just the diaries...

The diaries are presented in their original forms but there are also the authors comments on such... and Scott fans beware. The analysis is by no means unbiased and at times, scathing. Very interesting to have the diaries side by side though and I enjoyed listening.

A listen that requires ‘concentration’ throughout

Great facts, and extremely well researched, but presented and narrated in a manner that requires extreme concentration - best suited for those with a real passion for the subject matter.