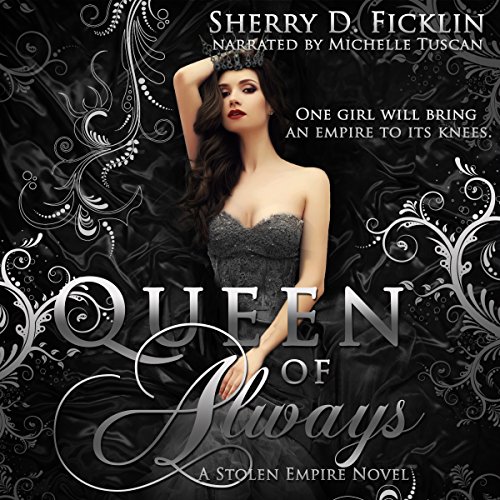 By: Sherry D. Ficklin
Narrated by: Michelle Tuscan
Try for $0.00

If her time at court has taught Catherine anything, it's that there is no room for weakness in Imperial Russia. With the empress' health failing and rumors of a change in the line of succession, her place in the royal line is once more in jeopardy. Tormented by her sadistic husband and his venomous mistress, Catherine must once more walk the fine line between pleasure and politics - between scandal and survival.

When her young son becomes the target of those rebelling against Peter's reign, Catherine will have to rise up to protect herself, her child, and her nation from his unstable and potentially catastrophic rule. This means putting herself at odds with the most dangerous man she's ever known, trusting those who once proved to be her enemies, and turning a nation against its sovereign. In the ultimate battle for the crown, new alliances will be forged, loyalties will be tested, and blood will be shed.

What listeners say about Queen of Always

What did you love best about Queen of Always?

What was one of the most memorable moments of Queen of Always?

That Catherine got the ending that she needed

Have you listened to any of Michelle Tuscan’s other performances before? How does this one compare?

I got this audio for a honest review from Sherry. This was a very good and emotional book based on some true facts and spun into a great story about one of Russia's greats Queens Catherine the Great. This book was well written

I very much enjoyed this series and loved the voice actor in book 1 and 2. The audio in this book is poor quality the levels change frequently and it's tinny. The audio often has sections where the same phrase is repeated. The narrator is also inconsistent and not as good as the previous one.

Yes, great series with a wonderful heroine that stays strong in the face of all adversity.

She was decent at keeping with what had been previously established by the first and second book's narrators. However, the sound quality was tinny and uneven. The hard vowels were very harsh into the microphone and the quality (or lack thereof) was definitely missing. Disappointing.

It was a good story, but the third installment felt unfinished or not as thought out? And the narration quality was low, I adore the narrator and her beautiful voice but the quality of the reading had echoes and odd background noises and many inconsistencies, all I can guess is something was rushed through for this last part of Catherine's story. But I will forever be a fan of Catherine the Great all thanks to this clever fictional rendition of her life.

The background noise is terrible on this audiobook. You can hear talking and other random noises throughout the performance. In addition, the narrator just does not speak clearly at times. If it weren't for such a fascinating story, I would have deleted it without finishing.

What would have made Queen of Always better?

The story was great - I was so intrigued by the series that I finished listening to the 3 books within 3 days. While this story loosely based on the life of Catherine the Great was very interesting, it was completely ruined in this book by the poor production and narration.

From the first minute of the audio book, there was annoying background noise and an echo, which seems like it was not recorded in a proper studio and the sound editing was either poor or just non existent.

The narration was at times very rushed, with extremely poor phrasing and pauses in weird places that chopped up sentences in inappropriate places. Because of this, sometimes some words could not be heard clearly. The announcement for each chapter also sounded like a machine voice.

The narration also made Catherine sound ditzy, fickle, or sarcastic at times when it should not have sounded that way given the context, and made other characters sound really stupid - especially Peter (yes he can be stupid, but he didn't need to sound that way).

The narrator for book 1 and 2 was very good, so it was extremely disappointing that they changed to a different narrator for book 3. If I wasn't so intent on finding out the rest of the story, I would have stopped listening from Chapter 1.

The way that Catherine always rises above her circumstances no matter what comes her way or what cruelty or heartbreak she endures. She is inspiring.

Would you be willing to try another one of Michelle Tuscan’s performances?

Absolutely not. I have listened to many audio books, and this book was by far the worst narration I have ever heard.

It is incredibly frustrating when the narrator is changed in the same series. It is fine when there is a different narrator for a different character, but if the story is still about the same character, the narrator should not change - unless they are really bad, in which case it would be better to record again from the beginning with a good narrator. It is such a shame that a good story is ruined by poor narration and production.