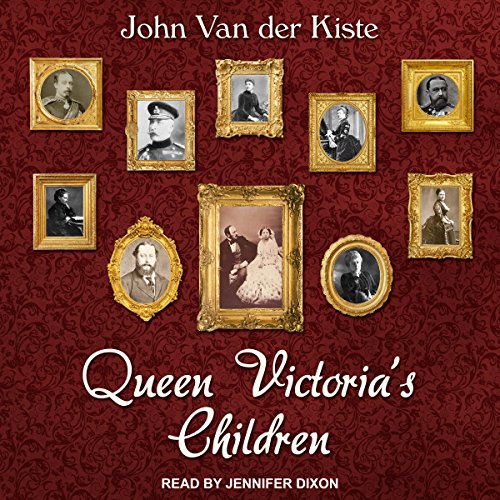 Queen Victoria and Albert, the Prince Consort, had nine children, who, despite their very different characters, remained a close-knit family. Inevitably, as they married into European royal families, their loyalties were divided and their lives dominated by political controversy. This is not only the story of their lives in terms of world impact but also of personal achievements in their own right, individual contributions to public life in Britain and overseas, and as the children of Queen Victoria and the Prince Consort. John Van der Kiste weaves together the lives of each of these children and shows how their mother was the thread that kept the family together. It is a refreshing insight into one of history's most popular royal families.

Was the narrator just too bored?

No. It is a plodding narration of what should be a fascinating reliving of an amazing time and amazing characters. Instead it is a monotone regurgitation of facts.

I love all the characters..

Would you be willing to try another one of Jennifer M. Dixon’s performances?

Do you think Queen Victoria's Children needs a follow-up book? Why or why not?

Well this is a ridiculous question.

I held on till the end, but so utterly disappointed.

Interesting and full of great information!!

I thoroughly enjoyed this book. Felt it was fair and not a fluff piece like some others I've read on Victoria. The queen and her family were so incredibly complex. I could probably read this again and learn even more bc some of the global context was a bit lost on me (would need to brush up on my European history a bit). But I felt I followed along well enough and enjoyed getting to know her children and their personalities and individual stories. The narration was okay. Definitely recommend it for anyone interested in THE Victorian family.

It felt jumbled and choppy, I think I would have preferred 9 separate biographies.