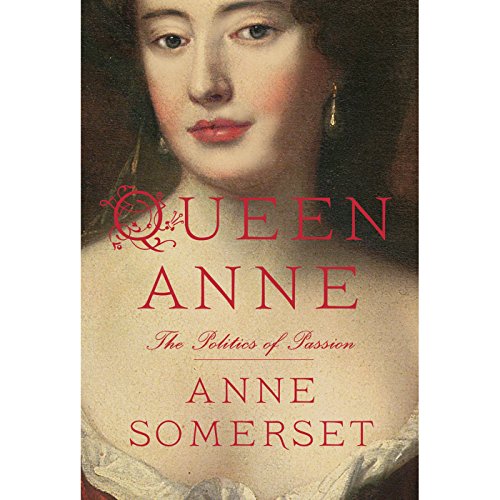 By: Anne Somerset
Narrated by: Hannah Curtis
Try for $0.00

She ascended the thrones of England, Scotland, and Ireland in 1702 at age 37, Britain's last Stuart monarch. Five years later she united two of her realms, England and Scotland, as a sovereign state, creating the Kingdom of Great Britain. She had a history of personal misfortune, overcoming ill health (she suffered from crippling arthritis; by the time she became queen she was a virtual invalid) and living through 17 miscarriages, stillbirths, and premature births in 17 years. By the end of her comparatively short 12-year reign, Britain had emerged as a great power; the succession of outstanding victories won by her general, John Churchill, the Duke of Marlborough, had humbled France and laid the foundations for Britain's future naval and colonial supremacy.

While the queen's military was performing dazzling exploits on the continent, her own attention - indeed her realm - rested on a more intimate conflict: the female friendship on which her happiness had for decades depended and which became, for her, a source of utter torment.

At the core of Anne Somerset's riveting new biography, published to great acclaim in England, is a portrait of this deeply emotional, complex bond between two very different women: Queen Anne - reserved, stolid, shrewd; and Sarah Churchill, Duchess of Marlborough, wife of the queen's great general - beautiful, willful, outspoken, and whose acerbic wit was equally matched by her fearsome temper.

Against a fraught background, the much-admired historian, author of Elizabeth I , tells the extraordinary story of how Sarah goaded and provoked the queen beyond endurance.

"Spirited and extremely convincing.... The rivalries and back-stabbing between various factions make as unedifying a spectacle as anything to be seen on today's Senate floor." (Brooke Allen, The New York Times Book Review)
"A sumptuously great read from a master chronicler at the height of her powers.... Every page is seamlessly good reading." (Steve Donoghue, Open Letters Monthly)
"A must-read for all those who love English royal history and, after three centuries of misogyny and misunderstanding, Anne Stuart has found a worthy champion in Anne Somerset." (Gillian Gill, author of We Two: Victoria and Albert, Rulers, Partners, Rivals)

What listeners say about Queen Anne

The information was well researched and interestingly laid down. The narrator, however, realllly reallllllly let it down. She needs to work on breath control because at times, she established a pattern of 3 words (delivered with a downward inflection implying a full stop) 4 words (full stop) thus leaving sentences hanging.

I realise that a person who mispronounces words is a victim of a language-poor environment. They only know of words by reading, not by hearing. I don't wish to demean such readers, but this particular narrator must have been living under a rock not to know how to pronounce such common words as papal (pronounced by Anne Somerset as (p)apple) or papist (pronounced by Ms Somerset as pap ist ) or Ovid as (oh)vid. There were too many of these to list here... so SHAME on the EDITOR who gave himself a mention at the end.

Part of the storyteller's art is NOT to jolt the reader out of the spell of the world they are creating. Poor breathing causing strangely delivered sentences and mispronunciations do just that. I kept being reminded that I was listening. Mind you. I had quite. A few laughs. But I don't think. This was. The intention of. The Writer.

If the information wasn't so well written I would have returned this book. Persevere if you can. There are stretches where the narrator does relax and read in an adequate manner.

This is a good biography of Queen Anne. But Hannah Curtis is not good.

terrific history and without revisionist bias

i was concerned taking this title having consumed churchill's marlborough volumes as well as the recent 'the favourite' movie both of which center on queen anne. the concern was that the author and/or reader would impart 2010 societal fashions onto early 1700s life. it does not. the author simply presents the documented history using the correspondence of the principals to tell a fascinating history without inserting a lot of 'analysis.' rare these days and appreciated.

Rather long but a great history on Queen Anne. gives a really good view on Anne and those around her throughout her life.

Thorough and sympathetic without being maudlin.

Queen Anne, the court, and the events of her lifetime, are described with many references to original sources, but told very fluently. I was never bored with any "dry" places. This biography does evenhanded justice to an underrated monarch and to an underrated personality.

Queen Anne was one of Britain’s most formidable rulers. She reigned as the last of the Stuart monarchs until her death in 1714 brought her Hanoverian cousin George I over from Germany to sit on the English throne. Nicknamed Brandy Nan, she was nearly six feet tall (the height of her predecessor Elizabeth I) and was so obese she had to be carried in a sedan chair, yet her leadership skills enabled her to make crucial decisions that would ensure (as it did during Elizabeth’s time) that Britain would remain a major world power. Anne also suffered setbacks in her personal life that would have destroyed anyone with a much weaker character: none of her children survived, and her closest friend the power-hungry Sarah, Duchess of Marlborough, became her most redoubtable enemy. Faced with an array of indomitable challenges and few people she could trust other than Sarah’s poor cousin Abigail Masham, whose loyalty never wavered, Anne rose above the petty squabbles at court to leave a legacy that strengthened the foundations of the Empire but have largely been overlooked by most historians. A truly inspiring biography with compelling narration by the wonderful Hannah Curtis. Highly recommended.

I was looking for history as I knew nothing about Queen Anne, other than the tragedies around child birth. She is featured prominently outside of St. Paul’s in London. Story was more about the times prior to her assenting to the throne. I would have liked to hear more about what she accomplished and how she reigned. There is a lot about her personal relationships which made her appear weak - not sure that was the intended take away. Still in all, I am better informed now so I guess the book did the trick.

I can't understand how a story of royalty, jealousy, lesbianism, political intrigue, and rivalries be sooo freaking boring? the reader is terrible. She has a deadpan voice and pauses every three words for no reason. And the writing turns all of the tragedy and drama of Anne's life into a drone of dates. Skip this one.

Felt way too long, but the author was incredibly thorough. I certainly learned everything about Anne I need to know.

Sarah was, in truth, vindictive & cruel.

Informative in a cumbersome way

Too long. Too many repetitive details. Chronologically confusing. Being read out loud with clear but monotonous inattentive voice.
I appreciate the writer's effort for her extensive research. But too much information became redundant and tiring to hear. It may attract wider audience if this book has been heavily trimmed or rewritten with precision.