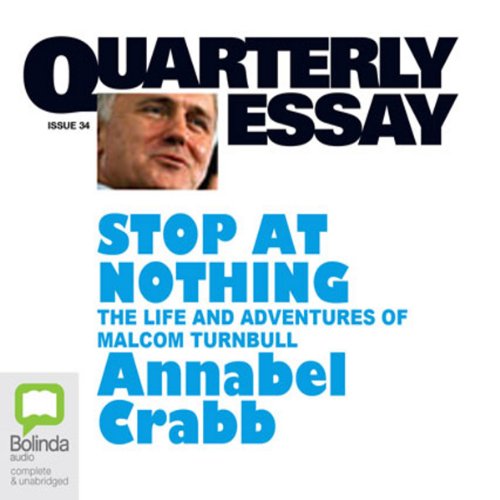 Quarterly Essay 34: Stop at Nothing: The Life and Adventures of Malcolm Turnbull

By: Annabel Crabb
Narrated by: Marie-Louise Walker
Try for $0.00

Based on extensive interviews with Turnbull as well as those who have worked with him, this is an essay full of revelations. Crabb delves into young Malcolm's university exploits - which included co-authoring a musical with Bob Ellis - and his remarkable relationship with Kerry Packer, the man for whom he was at first a prized attack dog, and then a mortal enemy. She asks whether Turnbull - colourful, aggressive, humorous and ruthless - has what it takes to re-invigorate the Australian Liberal Party in the wake of John Howard. She discusses his vexed relationship with Kevin Rudd, and the looming presence of Peter Costello. This is a scintillating portrait by one of the country's most incisive reporters.

What listeners say about Quarterly Essay 34: Stop at Nothing: The Life and Adventures of Malcolm Turnbull

Interesting to hear about the PM's life before politics. Reading this made me have a greater respect for Mr Turnbull.