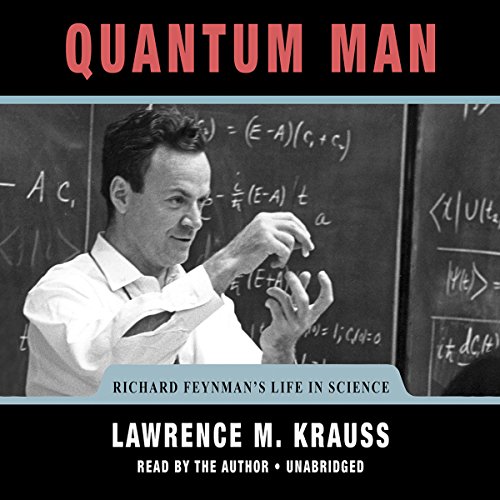 Perhaps the greatest physicist of the second half of the 20th century, Richard Feynman changed the way we think about quantum mechanics, the most perplexing of all physical theories. Here Lawrence M. Krauss, himself a theoretical physicist and best-selling author, offers a unique scientific biography: a rollicking narrative coupled with clear and novel expositions of science at the limits. An immensely colorful person in and out of the office, Feynman revolutionized our understanding of nature amid a turbulent life. From the death of Feynman’s childhood sweetheart during the Manhattan Project to his reluctant rise as a scientific icon, Krauss presents that life as seen through the science, providing a new understanding of the legacy of a man who has fascinated millions. An accessible reflection on the issues that drive physics today, Quantum Man captures the story of a man who was willing to break all the rules to tame a theory that broke all the rules.

What listeners say about Quantum Man

As the narrator/author states up front, this book is more about the science of Richard Feynman than his life adventures that are well known. I was impressed, however, that the author could keep the science of particle physics interesting even for non-physicists. It is not that you don't have to pay attention. I'm a electrical engineer with a more than a few physics clases under my belt, but the text was sometimes a challenge to keep up with while driving around in the car (the way I learn most things these days). I have an e-book version also and now plan to take a more leisurely read to grasp a bit more.

What I really enjoyed from this book is how the author describes Richard Feynman's mental process in finding solutions. Most popular biographies of great people (especially scientists) center on personal relationships along a chronological path but I prefer to know how the subject thought and dealt with life, both the successes and failures.

This a very good book on the science of Richard Feynman. This is not the sort of book that you can listen to while driving and not paying attention. There are several science concepts that require concentration. I would say the book is about 65% science 35% history. If you read James Gleick's biography on Feynman(also great) there is not much more in terms of historical info. If you want more historical info read Gleick. If you want to learn about Feynman's science get this. I recommend you get both (I did).

What's not to love about Dr. Feynman?

Would you listen to Quantum Man again? Why?

Who wouldn't love a bongo-playing Physicist? He left many in the dust when it comes to mathematics and Dr. Krauss writes an intriguing biography. Great stories intermixed with concepts I'll probably never understand but according to Dr. Feynman, it doesn't matter because its about the journey, its about adventure and discovering new things.

If you could sum up Quantum Man in three words, what would they be?

What was one of the most memorable moments of Quantum Man?

The oddly charismatic character of such a genius... Masterfully contrasted with the contemporaries of Dr. Feynman.

Have you listened to any of Lawrence M. Krauss’s other performances before? How does this one compare?

Dr. Krauss is brilliant yet again because he doesn't sound like he is "Performing"... he truly seems to LOVE what he is conveying through his books. His passion is evident in all of the passages in this book!

It made my brain hurt thanks to the sheer quantity of genius compressed into this one man! I am humbled by the vast amount of knowledge developed and disseminated from Dr. Feynman.

If you have any interest in Quantum Physics... this is a MUST!

This is an excellent book about Richard Feynman's contributions to physics over his long, storied career. It is not a biography, although one has a great sense of the man by the end.

The author discusses his contributions to theoretical physics in detail and a basic familiarity with the concepts of relativity and quantum mechanics are required. There are no equations, so math skills are not required but if you are not already acquainted with the fundamental problems of modern physics there won't be much for you to enjoy.

The performance was excellent. I was genuinely surprised at the end to find I had been listening to the author the whole time. I suppose the text required someone well versed in theoretical physics but his performance is engaging and inflects and enunciates better than some professional readers I have listened to.

I would highly recommend the book for someone who is a fan of Dr Feynman's and wants a better understanding of why he is such a legend in the world of physics.

good read on a great mind

I'm not a scientist, but I enjoy reading about it, especially when it comes to its history. This is an excellent biography of a man with a great mind. Almost every aspect of the physics was over my head, but I enjoyed learning how Feynman's mind worked. A unique character to whom we are still learning just how indebted we are.

I live in Los Alamos, so always like to listen to books about the lives of the brilliant scientists who lived and worked here during the Manhattan Project. This book, however, is more appropriate for a physicist. I think it would be fascinating for anyone in that field. It was interesting to try to fathom Feynman's unbelievable brilliance and the book accomplished that by leaving me in the dust!

In this volume, a full biography is interspersed with well explained physics that Richard Feynman was so passionate about. I couldn't explain all of it to a friend, but it was written well enough that I could understand most of the concepts. That's inspirational too.

The fanaticism that follows Richard Feynman is fun to read about from those who understood his work and appreciated his position in this world.

an engaging story of an extraordinary scientist

I loved this book because the author, Dr. Krauss truly understood the physics behind the stories and this allowed him to give the anecdotes and stories more depth. That additional detail translated into a deeper understanding of Dr. Feynman's great intellect. Dr. Krauss narration was superb. What a great book.