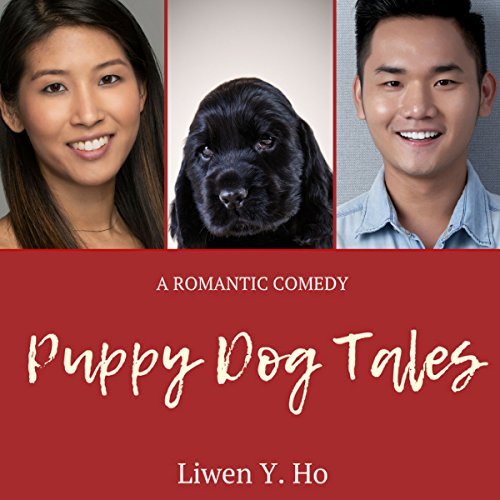 By: Liwen Ho
Narrated by: Satauna Howery
Try for $0.00

An animal hater and an animal lover's paths collide the week leading up to Valentine's Day.

Melvin Lai inherited the last thing he ever wanted from his favorite uncle: a cocker spaniel. Now he's on the verge of losing his home to the unruly puppy and, much to his surprise, his heart when he meets Dr. Chu, Sparkle's vet.

Vivian Chu loves caring for her furry friends, so she can't fathom how anyone could think poorly of her new patient, especially his owner. To her, first impressions are everything, and the one Melvin left has her feeling disheartened and bruised - literally.

He longs to make her his valentine; she can't wait to escape him. It's going to take a miracle for Melvin to win Vivian's heart, but nothing's impossible when four-legged conspirators are involved.

Narrator took this story to the next level :)!

Puppy Dog Tales was such a fun listen! Having read this story before (and loved it), I could really focus on the narrator's voice(s) and how she'd bring to life all the characters. I loved the different voices she used, and how she especially made both Vivian and Melvin relatable; but what I ended up enjoying the most from her performance was the voices of Vivian's mom, as well as the meows and barks from the pets that are a part of this story. These things definitely added another layer to the audio experience, making it even richer. Well done! ~ 5 stars

Story review: Puppy Dog Tales is an entertaining, short read by Liwen Ho. It's perfect for animal lovers (or not), sweet romance readers, and, especially, fans of the enemies to lovers trope :) I loved that Melvin got his own happy ending with Vivian, and the role Sparkle played in it.

This was a great romance. Nice how he got another chance to give a first impression. It was also nice for him to have a change of heart towards animals. Very clean read.

Puppy and a kitten

This is really a good story it happens around Valentine's which is even better. someone always knows what you need.

a funny story of an inherited dog teaching a man how to care for someone. It took awhile, but he eventually realized that he did care for the dog. A clean story. I so enjoyed the Asian perspective.

Great story for animal lovers. I enjoyed this sweet little novella. The author a nice job writing the story.

I enjoyed this sweet little novella. The author did a fine job laying out the story in a quick yet believable way.

The performance was diverse and entertaining.

This story made me want to cuddle my dog. I also loved the give and take between the main characters. It was a novella that did an awesome job of making you feel like you know the character and still had a well developed plot. Great craft, despite being a short work of fiction!

I loved this story when I read it, but the narrator did an amazing job bringing it to life! Definitely one I'll listen to many times.

I really enjoyed this sweet and charming story. The characters were witty and engaging and the narrator was great.

This was a fun book.   A sweet and fun story.   Who ever thought that two people who's lives are so different could find some common ground?


I thought the scene when they first met was quite funny.   To start off on such a bad note,  I think I would have hoped the world would swallow me whole.