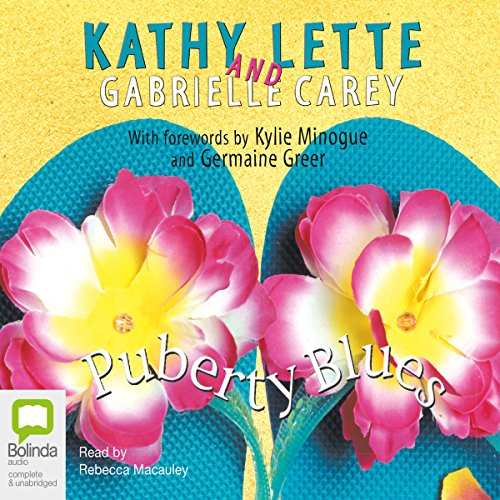 This is Kathy Lette's first novel, written with her surfie chick friend Gabrielle Carey, when they were 18.

Written 20 years ago, Puberty Blues is the best-selling account of growing up in the 1970s that took Australia by storm and spawned an eponymous cult movie. Puberty Blues is about "top chicks" and "surfie spunks" and the kids who don't quite make the cut: it recreates with fascinating honesty a world where only the gang and the surf count. It's a hilarious and horrifying account of the way many teenagers live, and some of them die.

With forewords by Kylie Minogue and Germaine Greer.

Should Popularity Be The Main Thing for Teenagers?

I am a fifteen year teenage girl and I found this book very upfront and thought provoking. I enjoyed the book immensely and thought the characters were realistic. Every girl or guy wants to be popular at some point in their high school years. But this book represents that not everything in the popular group is as fun and exciting as it seems to be. In this book it demonstrates how two girls who clearly wanted to be popular force themselves to change their behaviour in order to fit into the popular group. However, in the end they leave this group in order to be true to themselves. This saves them from a life that could have ended in tragedy.
I recommend this book.

Took you back to your teenage years

What made the experience of listening to Puberty Blues the most enjoyable?

Just brings back the teenager years even if we didn't all spend it at the beach. It was the same in the country.

What other book might you compare Puberty Blues to and why?

There is no other book that you could compare it to. It is totally Australian.

What does Rebecca Macauley bring to the story that you wouldn’t experience if you just read the book?

She puts in a heap of felling in to the audio. But at the same time I loved the book when I read it years ago.

It brought back all the memories of all the stuff we got up to as teenagers.