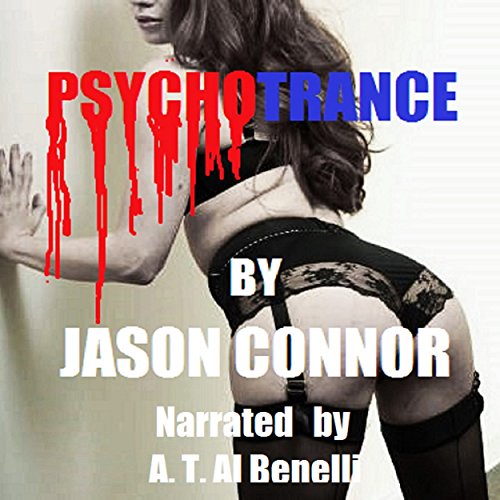 Detective John Black finds himself working full time at the NYPD. Initially called in to investigate a body found in a shallow grave, Black and his rookie sidekick are drawn deeper into a world of brutal ritualistic murders. On the trail of a serial killer, John Black has to endure a number of setbacks which include corruption and questions about his own sanity.

What listeners say about Psychotrance

Another "PSYCHO" book from Connor...

Would you consider the audio edition of Psychotrance to be better than the print version?

Oh heck yes! Would you rather go to a play... or just read the script? It's like listening to Inner Sanctum or the old Alfred Hitchcock radio shows. I can close my eyes and "see" the whole story unfolding in front of me. I've yet to master the art of reading with my eyes closed...

Definitely Della. As dangerous and weird as she is/was... she was hot! She could handcuff me to her bed anytime.

This is a tough question... because ALL of the characters were portrayed superbly... especially Della (see above) but of course since John Black is the main character in all of Jason's detective series books... we all like him. But then how can you ignore Bill, John's boss, who also appears in all the books. Same with Chief O'Rourke. Cal is the new kid on the block and likely the weakest character... but he does his bit. If you're going to put a gun to my head and force me to pick my favorite... I'm going with Della. I realize it's a man doing her voice in the audio... (and I have to put that out of my head sometimes)... but damn, he did such a great job of making her sound sooooo sexy and hot!

Extreme? That's a powerful word. Nah... not extreme! I laughed, I felt sad at times, I got the "creeps" pretty often almost to the point of being scared... but nothing truly extreme. It was just a darn good detective murder mystery with a few "kinky" wrinkles thrown in told by a very talented narrator. Nothing extreme... just well worth the seven bucks!

I like Connor's stuff a lot. This is the THIRD of his books I've bought... and all three were narrated by Benelli. They fit very nicely into my Philly to New York commute on Amtrack. A couple of trips back and forth and the book is done. Bada-bing, Bada-boom, Betty-boop!