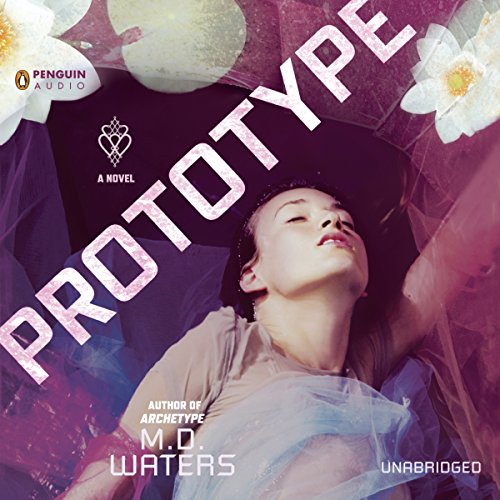 The stunning debut that began with Archetype - and has listeners buzzing - concludes in Prototype, when a woman’s dual pasts lock onto a collision course, threatening her present and future.

Emma looks forward to the day when she can let go of her past - both of them. After more than a year on the run, with clues to her parents' whereabouts within her grasp, she may finally find a place to settle down. Start a new life. Maybe even create new memories with a new family.

But the past rises to haunt her and to make sure there's nowhere on the planet she can hide. Declan Burke wants his wife back, and with a little manipulation and a lot of reward money, he's got the entire world on his side. Except for the one man she dreads confronting the most: Noah Tucker.

Emma returns to face what she's done but finds that the past isn't the problem. It's the present - and the future it represents. Noah has moved on and another woman is raising their daughter.

In the shocking conclusion to M.D. Waters' spectacular debut, Emma battles for her life and her freedom, tearing down walls and ripping off masks to reveal the truth. She's decided to play their game and prove she isn't the woman they thought she was. Even if it means she winds up dead. Or worse, reborn.

This was a thrilling conclusion to the 2-part Archetype series (my favorite of 2014). Much like the first book, this was chock-full of action, romance and endless plot twists. It had the perfect blend of everything I enjoy in a romance novel. Some people might be turned off by the sci-fi/dystopian aspect of this book, but at it's heart this is a love story. There are plenty of swoon-worthy moments and it's not filled with endless pages of meaningless sex scenes.
Khristine Hvam is one of my favorite narrators and she did an excellent job of capturing the heart and soul of Emma.
I LOVED this book and can't recommend it enough.

Please give us a 3rd book! Characters and performance were amazing! Action packed and romantic plus scifi. Everything.

Of all my 70 plus audible books I have, This one was beyond ABSOLUTELY AMAZING! I was unable to stop Listening as the narrator Brought the story to life! Never have I found myself holding my breath During certain parts of the story As well as chills running up my spine and down my arms! Love Emma and Noah In this is one I will re listen to several times

I wish there were more books in this series! I loved Archetype and Prototype and the books keep you guessing and have plenty of twists and turns throughout. There is a little bit of "oh I love you so much I will die without you, I just love you, nothing else in life, ahhh just die to love you" in this book. I don't really like when the rest of the story lacks and it becomes only about two people being together but there is enough built into this story that you can overlook the love obsession. I would recommend reading this book if you are looking for a girl kicking ass and taking names, a love story, and good conquering evil.

I like how khristine hvam portrays the main character, Emma.
I don't like how the main character NEVER EVER used a contraction. I never paid any attention in the first book but could only focus on it in the 2nd.
Khristine struggled with the male voices especially since the book takes place in a male dominated society, but I like her voice nonetheless. she keeps the story going and portrays emotions well.
thankfully the one sexual encounter wasn't as long or as descriptive as in the first book. It could still be skipped without losing any character or plot development.

I definitely think listening was time well spent, I always appreciate reading or listening to a story even though this one was not my favorite.

Would you be willing to try another book from M. D. Waters? Why or why not?

I probably would not try an audiobook from this other right away. I find the writing to be slightly awkward, the worst part is that there is NO use of contractions. Everything is "I do not know" or "I am not sure" instead of "I don't know" or "Im not sure." This seems like it wouldn't be so bad and I was able to kind of get through it when I actually read the first one. However, its almost painfully awkward to listen to. The characters in this story are not necessarily formal and listening to them speak in such an unnatural way almost ruined the story for me and made me dislike characters.

What aspect of Khristine Hvam’s performance would you have changed?

Good reading but slightly more theatrical than what would fit the characters in the story that they are in.

Could you see Prototype being made into a movie or a TV series? Who should the stars be?

I can see this book being made into TV or movie!

Pretty good, could be better

I really like the concept and ideas in which the book is based, I think it is really a current subject and not entirely unbelievable, but quite possible that something like this could be considered a good idea in a not so distant future.

I was really happy about the book almost through all of it but the end. It ends up been as cliché as any other romance book, the end is too rush for my personal liking, and all the good in the book gets a little shadowed by that.

Even with it, I do think is a pretty good book, and would recommend it if someone else wants to read or listen to it.

The narration is a little slow for my liking, but again a played it at 1.25X the speed and turn out to be much better.