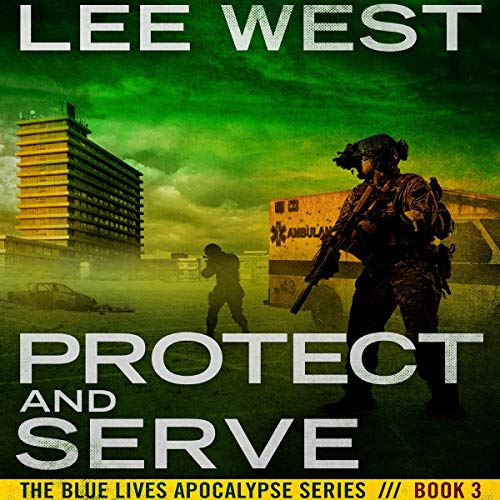 By: Lee West
Narrated by: Charles Hubbell
Try for $0.00

In the wake of a costly but successful attack to liberate the town of Porter from the New Order, local police officers and military veterans work tirelessly with the people to repair their ravaged community.

Still on edge from the harrowing raid and terrified to learn their daughter's criminal ex-boyfriend is still on the prowl, Sam and Jane Archer start to think about a more permanent solution to their already tenuous situation. Their plan will have to wait.

When a power struggle erupts between two rival gang leaders, one of them concocts a ruthless plan to reign supreme. A plan that could permanently tip the balance of power in his favor against everyone - including the police.

Once again torn between duty to family and her fellow officers, Jane will be pulled into the middle of a seemingly impossible battle - between a group of marauding prisoners hell-bent on destroying the communities they infest and the first responders responsible for keeping those communities safe.

Protect and Serve is the final installment of the Blue Lives Apocalypse series - dedicated to the brave men and women who walk the thin blue line.

What listeners say about Protect and Serve

The story overall was pretty good but the narrator was sub par. He did well when it was his own voice but when he tried to switch voices it was the pits.... hence the 3 stars.

No 4 of the series-satisfying conclusion!

This series demonstrated the importance of preparation and perseverance in dealing with survival. I liked the family emphasis (primary and extended). The characters were believable and well developed. Nice work!

Unless you like fluff do not buy this series

Story should have been 2 books. Author fluffed up the books so he could have a poor 3 book series. Also shows author incapable of writing a good story

I don’t if it was the narrator or I’m just bored with this story. I couldn’t force myself to finish it.

the whole series was packed full of excitement and a quality story line. also had some great prepper knowledge as well.

In the future if you are going to include reloading ammunition, find out how it works. You cannot load just Lead bullets.