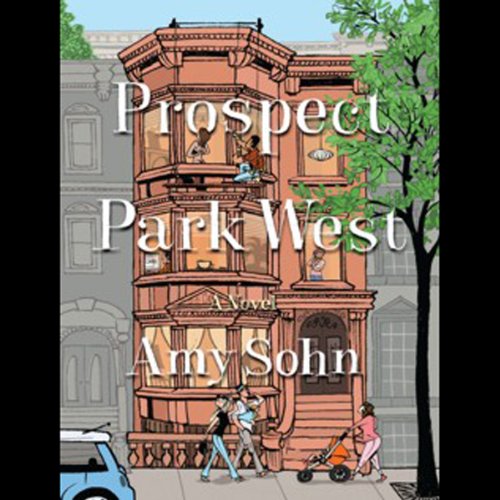 From the perennially hot author and columnist Amy Sohn comes a smart, sexy, satirical peek into the bedrooms and hearts of Prospect Park West.

In the park, the coffee shops, and the playgrounds of the neighborhood, four women's lives collide one long, hot Brooklyn summer. Melora Leigh, a two-time Oscar-winning actress, frustrated with her career and the pressures of raising her adoptive toddler, feels the seductive pull of kleptomania; Rebecca Rose, missing the robust sex life of her pre-motherhood days, begins a dangerous flirtation with a handsome local celebrity; Lizzie O'Donnell, a former lesbian (or "hasbian"), wonders why she is still drawn to women in spite of her sexy husband and adorable son; and Karen Bryan Shapiro finds herself split between two powerful obsessions: her four-year-old son's well-being and snagging the ultimate three-bedroom apartment in a well-maintained P.S. 321-zoned co-op building.

As the women's paths intertwine (and sometimes crash), each must struggle to keep her man, her sanity, and her play dates.

"Sohn weaves each individual story together beautifully....This is just too much fun." (Library Journal)

I gave it one star because Audible wouldn't let me give in zero. Everyone in this book is a horrible, self centered person. Even worse, this book has no end; it simply stops. Don't waste your time and money.

THIS BOOK IS HORRIBLE

This story has absolutely no plot and if I had to listen to one more celebrity name during the course of the book, I was going to scream. I am still trying to get through listening to this book and that is only because I am hoping the characters get killed off, that would be the perfect ending to this book.

All of the characters featured in this book were obnoxious, whiny, unlovable women. Their stories were no more compelling. I listened to it all the way through, hoping for some redeeming quality, but there was nothing. The only vaguely interesting aspect was that this is set in my neighborhood, but if I ever feel like I live amongst such gross people, I will probably move.

Don't bother with this trash!

After getting about an hour into this audiobook, I got fed up to the constant portrayal of negative stereotypes of African Americans in the story. Maybe be author was trying to show the perspective of upper class White Americans by doing this but I did not feel that it added anything to the story. At one point one of the character described a group of Black children as animals, this came after someone was robbed by a Black man and another was wrongfully accused of pick pocketing. I just couldn't take anymore. Even if you aren't offended by the racial references, you will soon tire of the constant name dropping of Hollywood stars that reads more like one of those magazines near the grocery store checkout counter.

DON'T WASTE YOUR TIME WITH THIS BOOK!

There really should be some law that necessitates all trashy chick lit books have hot pink covers and has some punny name with the suffix "tini" and a clothing or in this case stroller designers name. I suckered in because I live in the area, in a word, craptacular