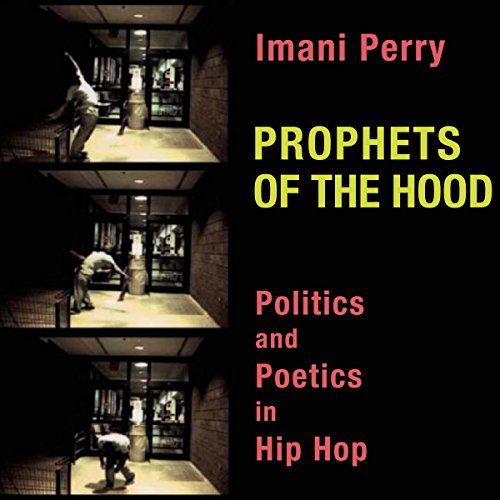 Prophets of the Hood

By: Imani Perry
Narrated by: Emil Nicholas Gallina
Try for $0.00

At once the most lucrative, popular, and culturally oppositional musical force in the United States, hip-hop demands the kind of interpretation Imani Perry provides here: criticism engaged with this vibrant musical form on its own terms. A scholar and a fan, Perry considers the art, politics, and culture of hip-hop through an analysis of song lyrics, the words of the prophets of the hood. Recognizing prevailing characterizations of hip-hop as a transnational musical form, Perry advances a powerful argument that hip-hop is first and foremost black American music.

"Imani Perry's Prophets of the Hood is an extraordinary and brilliant book.... With lucid explanations, crisp writing, and sharp analysis, Perry has managed to actually say some very important things in a strikingly fresh manner...a stunning, magnificent work of art." (Michael Eric Dyson, named by Ebony as one of the 100 most influential black Americans, is the author of 16 books and is currently university professor of sociology at Georgetown University.
"Imani Perry has written the most subtle and nuanced treatment of hip hop that I know." (Cornel West, Princeton University)

What listeners say about Prophets of the Hood

I hated the way the narrator tried to rap. It was terrible and ineffective. If I wasn’t familiar with the delivery styles of the artists described, I would have been totally confused.