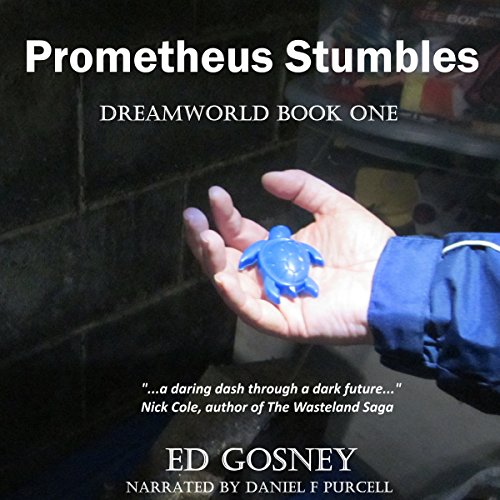 By: Ed Gosney
Narrated by: Daniel F Purcell
Free with a 30-day trial

In this futuristic thriller, an ordinary man gets caught up in extraordinary circumstances and finds himself on a harrowing adventure that he neither wants nor understands.

Derek Anderson considers himself to be a devoted husband, father, and businessman. He loves his family and is happiest when he is with his wife and daughter. But when a young Psi-Tal places the blue plastic turtle in Derek's hand, his life is turned upside down, as he discovers that the turtle can transport him into a nightmarish realm that Derek comes to refer to as Dreamworld.

While in Dreamworld, Derek learns of his destiny, but when the turtle sends him back to the reality he thought that he knew so well, he finds himself being pursued by a mysterious group of beings called the Watchers.

In a metaphysical race for his life, with the blue plastic turtle in his possession, Derek plunges into a centuries-old secret society that may be his only hope against the deadly enemies who will stop at nothing to get the turtle.

What listeners say about Prometheus Stumbles

This is an outstanding story. I was a bit confused by the beginning, but trust me, give it a minute and you will be hooked! If you love adventure, this is your book. The story moves so fast it will leave you breathless. The parallel to the Bible stories have to be noted, but this is not a “preachy” book. Honestly the story stands on its own and draws the reader in. The narrator is a master of accents and draws the listener in immediately. This does not disappoint!

Ed is an amazingly talented author

This book is a refreshing read, or in my case, listen. the concept and plot are really unique, and I enjoyed every minute of the book. There is none of the dreaded word fluff, every single word was needed, precise tight writing and extremely easy to get pulled in, I could not turn off the book, and listened until 230 am. just a wonderful nook, grab it!

I really enjoyed it.

I am obligated to say I received this book in exchange for an unbiased review, that being said; I really enjoyed the story. while it was a bit disjointed at times, and an occasional rapid point of view change can be disorienting. Overall it was a very well developed story.

Prometheus Stumbles. Gosney does not.

I like books with a lot of depth... books that make you think and get a little better if you come around for a second pass. I'm willing to be patient with an author if I feel like they're going to deliver in the end. This book started a little slow for me, but Ed Gosney delivered in the end. This is the story of a man who is forced into a difficult situation... a man that has to do things he doesn't want to do in order to protect his family. I tend not to read a lot of scifi, but this one has just enough psychological Dreamworld elements to keep me interested. And the characters are the strongest part. Give it a try, and be patient if it seems to start a little slow. It's worth it.

It has some interesting parts

The premise is intriguing , but the telling of the story is drawn out, confusing, and illogical at times. It is also a bit "religious" at times for my taste. The narration is fairly monotone with no pauses when the narrator/perspective changes. This makes the story even harder to follow as you jump unexpectedly between 5-7 different story lines. Although parts of the story are quite interesting and original, I'm not sure this one was worth the large amount of time it took to read it.