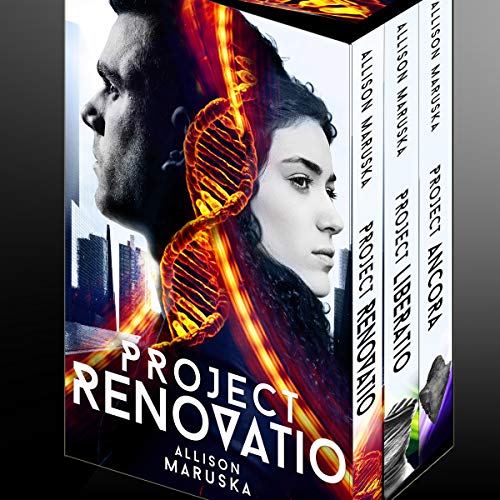 By: Allison Maruska
Narrated by: Grace Sylvan
Try for $0.00

Enjoy all three stories in the Project Renovatio trilogy in one convenient boxed set. Follow Levin and Rana as they learn the truth of their existence, fight for their freedom from dangerous factions, and realize their place in a world that fears them.

Levin Davis has it made. At 20, he’s a college graduate with a dream job, a beautiful girlfriend, and a life that can only get better - until he receives a mysterious letter suggesting his long-dead father is alive and hiding an extraordinary secret.

Distraught, Levin meets the letter’s author, who could pass for his twin. The stranger claims to be part of a genetically engineered race designed to survive global catastrophes and rebuild society, and he insists Levin and his sisters are as well.

Despite his disbelief, Levin uncovers not only the bizarre truth of his existence but also Project Renovatio’s ominous purpose - to secure genetic superiority, the new race must live according to harsh demands or risk severe penalties inflicted on their loved ones.

If Levin hopes to protect his family and live a free life, he must escape Project Renovatio - or rise above himself to fight them.

What listeners say about Project Renovatio: The Complete Trilogy