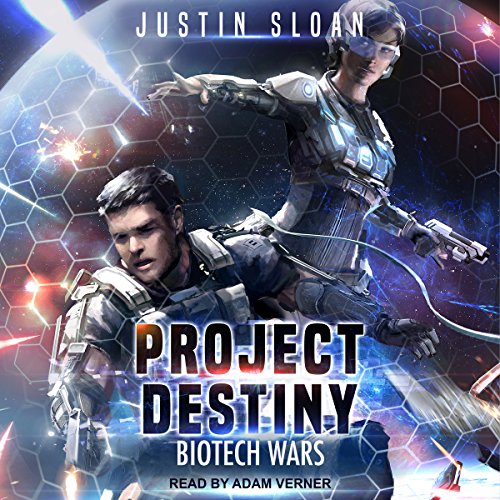 By: Justin Sloan
Narrated by: Adam Verner
Try for $0.00

Space Station Horus faces a conflict between supersoldiers and hackers.

Alice was told that her husband was dead, a month after he went up to space. Now she's formed a team of technical assassins dedicated to taking down New Origins, the corporation in charge of the station, if she doesn't get answers. Someone has to hold them accountable - even if it means going up against an army of genetically engineered supersoldiers.

Stealth is an elite among elites. This Marine wanted to be on the front line of expansion into space, and now he is. Only the hacker organization known as The Looking Glass stands against them, trying to pull apart all of his team's progress, all they believe in.

Neither will stop until they have justice.

What listeners say about Project Destiny

After Alice receives a message telling her her husband died one month after he arrived on a space station. They give her no other information. She leaves for the space station to find out what really happened. Not everything is on the up and up. She doesn't believe that her husband is dead.

What doesn't this story have? Boredom, that's what

An excellent story with lots of action. There are allies and enemies at every turn. One second they're your enemy only to become your ally. And even your enemies aren't truly your enemies, at lest not most of them. And when your number one target turns out to be someone from your past you don't remember who haunts your dreams, well that's gotta mess with your head. So get ready for enhanced human solders with high tech gear. But their un-enhanced enemies have a few tricks of alien origin up their sleeve. And it all takes place on a space station.

I requested and received this audiobook for free in exchange for an unbiased review. Because I promised a review, I listened to this audiobook to the end. In the beginning I thought Earth had satellite stations even around one of Jupiter’s moons. Instead I found the story is based on a space station that is even tethered to Earth, owned by a huge corporation. Rebels fight enhanced humans who have been brainwashed with few memories of their time before entering the company’s service. Basically, I felt the book was too long . It did not hold my attention throughout.

I really enjoyed the story but thought the narrator could have done better. I think Justin Sloan wrote a great story with some interesting twists and turns. I think another narrator would have made this a five star listen! I didn't feel Adam Verner was able to do the characters justice. I will be looking into the next book in this series.

Cracking start to a new series

Project Destiny is a great book that has an interesting concept of how far would a corporation go if they could provide a specialist military to protect a space based assist with very little repercussion to what they did with the soldiers. Infact it seems as if the politicians are encouraging it as they are so successful. The book has a slow build, but the author is careful with how he builds the world and as different parts of the story come together it's easy to follow.

Narrator is great and the voices are good / distinct and make the book easy to follow.

I did enjoy this audiobook. Story was interesting and as this was a prequel to Star Forged it explained some things.
Sometimes stealth character felt indecisive. Narrators voice intonation in some places felt strange🙂

As a fan of Justin i found this a little to slow at the start for his usual work. This i think was more because of the plot i feel and the build up which when it came made up for the start.
My advice stick with it as based on the later parts book 2 looks to be of the same vein. As with any new series its always a gamble even with great authors but i think this will work out very popular as the plot and characters have been well planned.
Im new to the skills of Adam Verner but i found him well suited to this.
I asked for this audio and have given this review as my own thoughts.

Stealth is an ex-marine and a vet yet he acts like a rookie and not a commanding presence or engaging character but do like Alice, she is smart and determined.