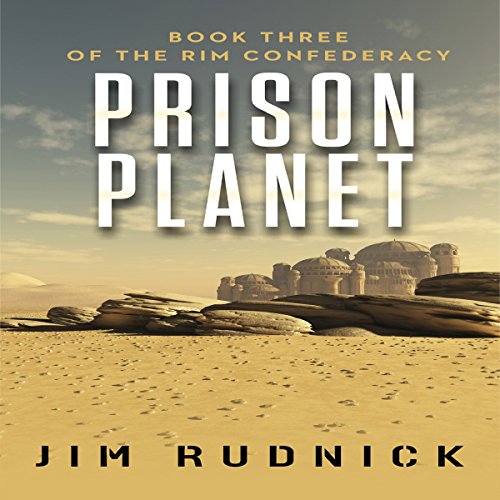 "After a failed planetary rebellion, the rebel leader and his men are all given life sentences on Halberd, the RIM Confederacy prison planet and sent to the maximum island penitentiary - a prison that has never had a successful escape.

And under his admiral's orders, Captain Tanner Scott has also been sent to do RIM Navy duty on the planet with the mission to give up his alcohol dependency. While he knows that this is what is expected of him by the admiral, he finds it more difficult to do that he'd ever imagined.

Tanner meets a woman - the sister of the rebel leader and while he falls in love with her, he is not sure that the feeling is mutual. Yet he tries to straighten out his life and his drinking but instead he is faced with the choice of a lifetime - love or death.

Against incredible odds in the middle of a prison planet escape, he makes his choice...and more than his own life depends upon that choice...forever changing the future of the RIM!"

Good space opera story, even if the individual installments are a little short. the pacing is decent and plot lines are varied and not too obvious. Prison planet isn't the best one yet, but big moves for the characters occur.

Another Brilliant Book from Rudnick

What did you love best about Prison Planet?

I am a big fan of this series, and really like how it has developed

What was one of the most memorable moments of Prison Planet?

The whole book was good

Eric Martin exceptional job through out the RIM Confederacy series. This one is much the same as the others, but all of them are excellent. He has a great voice that is very easy to listen to. He does a great range of voices for both genders, does different levels of emotions well, and is clear in his speech.


I was voluntarily provided this free review copy audiobook by the author, narrator, or publisher

Another Brilliant Book from Rudnick!

Would you listen to Prison Planet again? Why?

Absolutely - The great thing about this series is that it is easily one that you can listen to again, and pick up things that you did not get the first time around. It has such great characters, is so easy to listen to (or read) and enjoy, that it is a lot of fun to go back and re-live the adventure again.

My favourite character in all of the series has to be Lady St August. Her tenacity, the dialogue she comes out with, her attitude are just fantastic and make the book so much better.

What does Eric Martin bring to the story that you wouldn’t experience if you just read the book?

Only through the other RIM Confederacy titles. This one is much the same as the others, but all of them are excellent. He has a great voice that is very easy to listen to. He does a great range of voices for both genders, does different levels of emotions well, and is clear in his speech. He really adds something to the story in its telling that you wouldn't get from just reading it, making it so much better to listen to

All of the RIM Confederacy books are ones that you want to sit down and listen to in a single sitting, especially the first time. Then you can go back and listen to them again a second or third time and get even more out of them.

Prison Planet was fantastic, giving us a greater insight into Captain Scott. It really gives us a reason for his drinking, but shows us a lot more of the man he is, the demons he faces, his alcoholism and his PTSD. It shows a lot of the inner struggle that makes up the Captain and the fight that he goes through each and every day. It was a brilliant peice of character writing showing the true depth of who Tanner Scott is.
Rudnick writes so well as he combines the Military, Royalty and Political situations into a story as well as the personalities of a few key characters to tell an interesting and engaging story. This is Military Sci-Fi as it should be, interesting, detailed, exciting, fun, with some really fast paced and well described combat scenes, as well as brilliant dialogue and intrigue across sectors of space. This is an outstanding addition to the series.

Good book that continues the series!

A continuation of the Rim Confederacy story-line. Worth the credit.


This audiobook was provided by the author, narrator, or publisher at no cost in exchange for an unbiased review courtesy of AudiobookBoom dot com.

Good story, Captain Scott has been told to clean up his act and is sent to be the Rim Navy presence at the Prison Planet. Given a year to sober up, this book moves along nicely but still seems to spend to much time on drinking!! Capt Scott is better in this book, but still lacks something as a leading character.

Well read by Eric Martin, delivers a polished performance again and is easy to listen too.

I found it hard to follow when starting on the third book in the series.

This entry takes some interesting turns

I am a big fan of this series, and really like how it has developed until the end of this book. This book took what i think of as a weird turn at the end, though, so weird in fact that I was left scratching my head, saying huh? The rest of the book is good, with the Captain and crew of the Merwick stationed on the RC's prison planet as the navy presence as punishment for the Captain being a falling down drunk and the crew covering for him. Some exiles from the royal family of the Caliphate are imprisoned there, and attempt to escape/assassinate some government officials. Well, Captain Tanner Scott is not putting up with that. The Lady St. August is up to her neck in intrigue again, as is the Baroness, which leads to the surprise ending. Lets just say you wont see it coming. The characters are well drawn, although not particularly sympathetic, and the setting is realistic. The battles are well plotted, and the plot is fast paced and keeps the reader interested. The ending just left me a little cold, though. Eric martin did a great job as usual to bring the story to life, giving each character a unique voice. Fans of jack Campbell and H. Paul Honsinger should enjoy this series.

I was given a review copy of this audiobook free of charge in return for an honest review from Audiobook Blast.

What did you love best about Prison Planet?

The series has developed through the 3 books and this book has brought the story to a new and stronger point. There was more interaction between the characters and a lot of intrigue.

What other book might you compare Prison Planet to and why?

I really can't compare this book to any other since the concept is unique.

Eric Martin did an exceptional job on this book in his narration. Well spoken and very understandable. He also put a great deal of feeling into his performance. I was able to differentiate the various characters and he did a great job of injecting both excitement and grief felt by them.

This series started out as only good. It has developed into a much stronger story line and you actually can feel the anguish of the characters.

The idea of a space going empire(s) still hung up on the royalty issue is a bit far fetched but worse has happened throughout history. The personal trials of the characters make for fine theater also. This book lacked a lot of drama as it simply developed a situation that had to be resolved and carried through.

The book did leave the main character at a major crossroads in their life though. I look forward to see how this resolves itself.