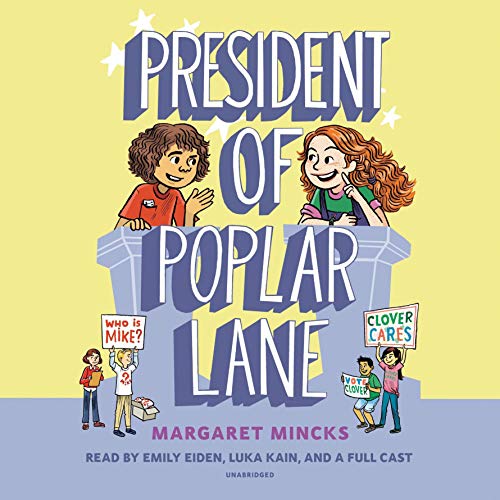 The Poplar Kids are taking over their middle school in this uproariously funny sequel to Payback on Poplar Lane, which NYT best-selling author Chris Grabenstein called "the funniest book I've read in years."

Clover O'Reilly is super psyched to run for class president. As the second oldest of five sisters, she struggles to be heard in her ginormous family. But when you are president of the seventh grade, everyone has listen to you!

Comedy magician Mike the Unusual feels confident onstage. Offstage, life can be tricky. It's okay that his classmates don't understand him, but it bugs him when his dad suggests he needs more friends. Is he willing to give up his passion to win friends...and votes?

Clover and Mike compete to rule their school in this sequel to Payback on Poplar Lane that's filled with scheming advisers, political gaffes, missteps that lead to big laughs...and campaign sabotage!

"A full roster of believably rounded characters navigating sometimes-silly situations, rich with droll, timely humor. The votes are in: This one is a winner." (Kirkus Reviews)

What listeners say about President of Poplar Lane

Awesome book. Glad I found this book and pay back on poplar lane. Also never want to put this book down. 😉😂 Also wish there was a third book of this series. Great book. Really engaging book. Already at chapter ten and feel like I am one of the characters. If I could choose which one I would be Mike because he try to be funny and is very quiet. It gets good around chapter 21. That is the turning point of the story no doubt about that!!!! 😂😂😂