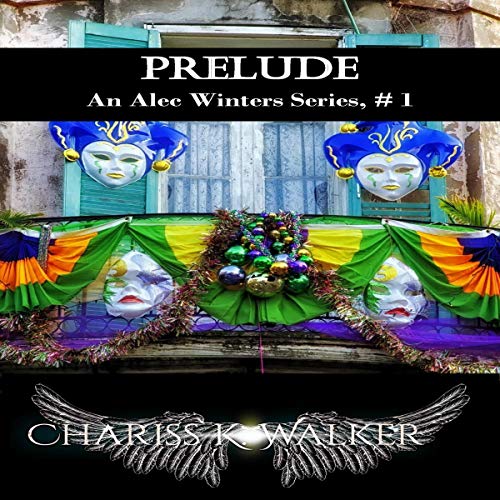 A young man is supernaturally transformed!

It all began when 17-year-old Alec, a New Orleans teen jock, discovered a terrible family secret involving his younger sister, Catalina. Alec's ensuing rage and desire for retribution took over. His fury was the catalyst that propelled Alec into this paranormal change.

Was the Winters’ family secret instrumental in changing Alec’s life, or was it his destiny?

As both angel and demon, he is a protector of innocent victims and a punisher of those who hurt them.

Prelude, a prequel to Crescent City, shares a behind-the-scenes look at Alec's life before that fateful night and gives little known facts about Alec’s relationship with Sabrina, Chaz, and Danae.

This dark urban fantasy and supernatural suspense thriller is only the beginning of Alec’s controversial story as an angel and demon. You can discover more about his life on the gritty streets of New Orleans in Crescent City, Port City, and Harbor City, the last installment in this emotionally charged four-book series.

Rated R: This dark fiction story deals with elements of fear, death, and the darkest side of life, and contains many emotional triggers. Not for the faint of heart, and not recommended for those under the age of 17.

Fans of the movie The Equalizer and the television series Supernatural and Constantine will enjoy An Alec Winters series.

What listeners say about Prelude: A Supernatural Suspense Series

Prelude is the first novel in the Alec Winters Series of four dark paranormal mysteries written by Chariss K. Walker.

The story follows a young man on his journey in life. Alec discovers that he can be an angel for those who love him and a demon for his enemies. As we progress, we see as Alec is forced to take some harsh decisions, especially when his younger sister is in danger.

Chariss K. Walker has written with Prelude a disturbing, but compelling novel that touches on some really dark aspects. But, like with other characters in her other works, those who we meet in Prelude have a well written character arc that evolves as the story goes forward.

Voiceover artist and narrator Walt Allen brings this captivating and entertaining story to life with different voices for each of the main characters and raises the level of immersion for the listener with a credible southern accent. He even adds some gas to the already bright burning fire by performing parts of the heated dialogues with something that could even pass off as religious fervor.

I enjoyed Prelude and I am looking forward for the next three audiobooks in this dark urban fantasy series. The author's writing style is easy to follow and the narrator does a great job with bringing all the characters to life in the listener's mind.

A word of warning: this is not a book for young adults or those faint of heart! Themes like emotional and sexual abuse, brutal events and other disturbing situations appear during the almost 5 hours of this audio production.

If you like this review please consider giving it a Helpful Vote below. You can find more of them here and on theAudiobookBlog. I also post reviews at the author / narrator / publisher’s request. Get in touch with me for more details.

I shivered as part of the tale was revealed!

Walt Allen has (or is able to use) the perfect Southern accent to make this book come alive! Having read the e-book I think I actually got more from the audio book. I felt myself shiver as part of the tale was revealed!

The narration was pretty good but a bit slow. I tend to listen to most books at around 1.4x but this one, I had to increase up to 1.6x. Other than that, the narrator was great!

The storyline flowed very well and I did not feel that I was missing anything as I listened. I am a big fan of supernatural, fantasy and thrillers so this book hit all of my buttons for a good story. It was dark, it was disturbing, it had great characters and a great storyline.

I was given this free review copy audiobook at my request, and have voluntarily left this review. Alec's life seems perfect, that is until he goes home. One fateful evening, a decision to save his sister's life, changes his life forever along with the members of his family. Once you look evil in the eye, you can never forget. Alec has a new purpose in life though and he does it very well. A somewhat dark plot that is intriguing and thought provoking as you follow the well written character in the suspenseful tale. Looking forward to the next book.

Demon or angel, that's the question?

This is the first book I've read by Chariss Walker but it won't be the last. I look forward to the next part. This leaves you hanging and wondering but at least it's not a cliffhanger. I don't do spoilers I can't stand them. It's well written and worth listening to. It sort of a mix of the old series of the equalizer and supernatural with a twist.
The narrator pulls off a excellent southern drawl, but it's a bit slow. I had to speed it up one notch.
This audio book was given to me for free at my request from the publisher or author or narrator and I provided this unbiased voluntary review.

I loved every part of this audio-book, from the opening chapter to the last word on the last page. Excellent character development and even though there were a lot of characters, each one added something rich to the overall story. Walt Allen had a way of pulling me into the story so that I really cared about the characters and the outcomes for each of them

The narrator does a great job with the accents. this is the second book by this author that I have read. If you’re like me, you will be thrilled to find a new author. You will not be disappointed. The author makes you look at some real life situations. what starts out as an older brother simply going through daily life, ends up and a life changing manner! Alec, Who is 16, when the book starts, is simply trying to do his daily routine. He still walks his 12-year-old sister to school, and picks her up. It is this close relationship, that will lead to a life altering change for both siblings! Alec is filled with two different auras. depending on what type of person you are, will determine which one you get to see. although this first book in the series is short, you will definitely experience a roller coaster of emotions. By the time it is all said and done, you will be anxious to pick up the next book in the series! I guarantee, you will not be disappointed!

Chariss Walker has crafted a tale in which the main character, named Alec, is an angel to the people that he saves but he is a demon to the people that he punishes. I enjoyed this story and found it to be thought provoking, fascinating, and emotional. I recommend this book for others who like supernatural suspense stories, but please note that some of the scenes and language are inappropriate for younger readers. Walt Allen does a great job as the narrator and provides distinct voices for the characters. I was given a free copy of the audiobook and I have voluntarily left this review.

This was a very well written story, The character building was fast and effective. The narrator was on point and moved at a steady pace.
If you like a good supernatural story then I highly recommend this book.

A disturbing story of injustice

Very sad but compelling story of injustice and the effects on the lives of the people involved.
Well narrated.
looking forward to the sequel.

I whizzed through this audible gem, I will now look forward to listening to more about Alec and all the characters that surround him, this prelude has set up all the background to all their stories and I cannot wait find out what happens next. it was really well narrated too!!!

Not my normal listen

This audiobook it definitely not my normal listen and is very dark in places but I enjoyed it non the less. Still not 100% sure of the narrator but he sort of fitted the story line quite well.