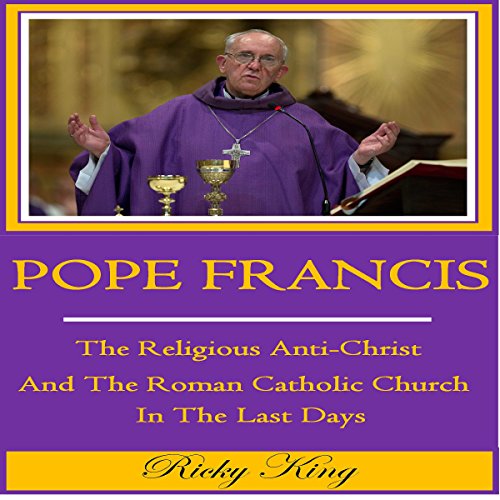 The Religious Anti-Christ and the Roman Catholic Church in the Last Days
By: Ricky King
Narrated by: Trevor Clinger
Length: 27 mins
Categories: Religion & Spirituality, Christianity
5 out of 5 stars 5.0 (5 ratings)

In the book of Revelation, the Apostle John wrote about a great religious system and organization that would be present and influential during the so-called Seven Years Tribulation Period, in which the Anti-Christ will be revealed and reign supreme. With his own divinely inspired words, he described this religion as, "mystery Babylon the great," and, judging by his statement, it's interesting that this mystical religion can be traced all the way back to the times recorded in the book of Genesis.

"And upon her forehead was a name written, mystery, Babylon the great, the mother of harlots and abominations of the Earth."

Considering the context of this verse, you'll see how John wonders in amazement about the identity of this mystical religion. Take note how he calls it, "the mother of harlots", but at the same time it is "Babylon the great", which is characterized by the description, "abominations of the Earth".

Now, of course, the obvious question gleaned from this verse is: how did this "mystery Babylon" become "abominations of the Earth" when, in fact, it was called "great"? In what sense did it became "great" while being "abominations"?

Well, to answer this, we must go back to its roots in the book of Genesis, chapters 10 and 11, where we will encounter one of Noah's great grandsons, Nimrod, who lived some 200 or 300 years after the Great Flood.

Virtually every sentence I listened to contained at least one historical or factual error. In addition, the reader is unlistenable. Although it sounds harsh, The reader can neither pronounce biblical terms correctly, nor many common English words, and has zero talent at reading aloud - he sounds like a fifth grade reader. I probably listened to 10 minutes of the book before I couldn’t stand it. It’s inexpensive, but overpriced.