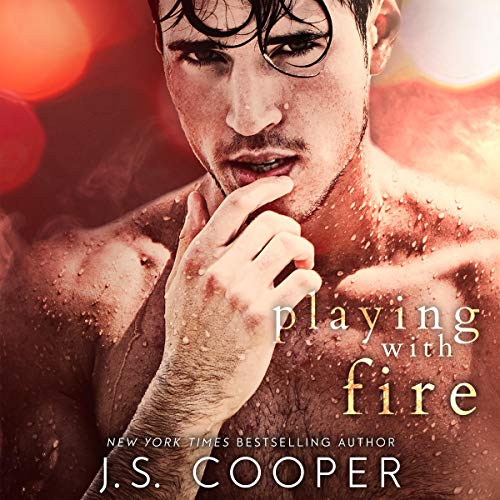 It was only meant to be one night. I wasn't meant to meet a handsome alpha billionaire like Grant Slate.

I wasn't meant to work the bachelor party. I wasn't even a dancer, but I couldn't tell my best friend no. She said I wouldn't have to do anything I didn't want to do. And there was no way I was going to be giving any private dances.

But when a man like Grant Slate asks you for a dance, you can't really say no. He's cocky, arrogant, dark, but he's also the most gorgeous, charismatic man I've ever met. I didn't know the dance would lead to him whisking me off to his private mansion. He wanted one night of passion, and I couldn't resist. I figured that one night was just one night.

Playing with Fire is a completely revised version of Alpha Billionaire by Helen Cooper.

What listeners say about Playing with Fire

Wow! The Suspense In This Dark And Steamy Story Is Insane. Evie Steps Into The Rabbit Hole When She Agrees To Go Home With Grant Slate! Get Ready For A Crazy Ride.


Evie Johnson always plays it safe. Unlike her more adventurous friends, she has never had a one night stand and it has been a while since she has had a date. Unemployed for six months and with her savings nearly depleted, she cannot afford to go out. In college she had studied journalism and business and now hopes to be an investigative reporter. She has been working on an article for a few months and has an interview lined up, but her bills are due. Hailey, Evie’s friend and roommate for years, knows the pinch that Evie is in when she asks for Evie to fill in for her at work on Saturday night. Hailey has a date she doesn’t want to refuse, and Evie can earn some quick cash. Evie rather reluctantly agrees to grant her friend the favor and heads to a club on the lower east side.

Grant Slate is the kind of man that no woman can refuse. His words are persuasive. Charismatic and handsome, he throws money around and is clearly used to getting what he wants. When he sets his sights on Evie, though, she has no idea that dark secrets and dirty desires are part of the package. But ultimately is isn’t so much the money that gets Evie to agree to go home with him, but the chance to just let all her inhibitions down for a night.

Evie doesn’t find what she bargained for in Grant. Although her evening might have begun like a dark fairy tale, she has actually fallen into a rabbit hole. Like Alice in Wonderland, she has no idea what is happening. Grant and his driver – Tyler, an ex-cop – have an unusual relationship and share the home. They mention a game, but wont’ tell her what the game is. Tensions rise as they argue with one another and try to win Evie to their side. A woman from the past comes to light, deepening the mystery. Eugenie’s letters only add to the mystery. Evie is told she cannot leave, although she has several opportunities. But the reporter inside has her staying put while most normal women would be running away. She senses that there is a story and is fascinated, and she wants to unravel it. But things get even more unsettling when her own secret is in jeopardy of coming out.

Wow! The suspense in this story is insane. It is dark and steamy and utterly confusing. Each twist adds to the chaotic scene. Evie seems mesmerized, which is the only explanation for her continued presence in the crazy situation. It is impossible to trust anyone or believe anything that is said. The relationship between Grant and Taylor is intriguing, and figuring it out will drive you crazy. There is plenty of steamy chemistry amidst the madness. The resolution is perhaps too easily achieved given the buildup. Evie eventually earns her fairy tale ending.

Evie steps into the rabbit hole when she agrees to go home with Grant Slate! Get ready for a crazy ride. The story is nicely written and plot-driven. The characters are mysterious yet clearly defined. The story is written in first person in Evie’s POV. I rate this book four stars.

As for the Audio: it is nicely performed and consistent with the book.

I received a copy of this book and audiobook and am voluntarily leaving a review.

I've read many of J.S. Coopers books, but this one was just flat our weird.

$25K is what it took for Evie to fill in for her roommate at work. $25K is what it took to set in motion a storm that just might consume her and those caught in the turbulence with her. Evie Johnson is a good girl. She has led a fairly uneventful life and knows there's something more exciting out there. Working as a stripper at a bachelor's party, she finds that something. Actually, that someONE finds her. Grant Slate picks Evie for a lap dance, but he has so much more in mind. He offers her an outrageous amount of money to come home with him but is vague in telling her what he wants. Evie is interested, yet frightened at the same time. She has made her decision and it's to follow her instincts. As handsome and alluring as Grant is, Evie can't help but be drawn to Tyler, his chauffeur. There is something about him that tells her she can trust him. She and Grant have a night of passion and seduction but, when she tries to gather her belongings to leave, he lets her know that she's not free to go. What game is he playing? The truth is not the truth anymore and things aren't always what they seem. There are other people in the house, but they are hiding from Grant and Tyler. Grant and Tyler are hiding things from each other. Secrets and lies are exposed that change the lives of all participants in this game of life. A beautifully written book that is more than engaging. You can't help but devour it and the aftertaste is delicious. A slight deviation in feel from her other books, this one is definitely deviant and very spicy!
This book is wonderfully narrated by Addison Spear. The voices are clear and the characters are easy to follow. A winning combination that makes the book even more intense!

For honest review evie is a freelance journalist but when she needs money her friend Hailey ask her to go to work for her, for a private bachelor party .where she meets grant and Taylor's who have to have her for their games. Awesome story

Don't Get To Close!

I really enjoyed the audio book version of this story. Half way through I realised I had read the book before. Narration was good. Story kept me interested enough to listen to it again. The male characters are very dark and the female character is a nice girl with a chance to go wild and crazy. She has chances to run, but does not. Nice story twist about the sister still in the house. Good ending to a great story.

I thought this was a great story and kept me on the edge of my seat. The story took me by surprised. I really enjoyed this book.

I felt the overall story was excellent it had me on the edge of my seat. The only thing I would have changed is have a male reader do the male parts.

What was she thinking?

Everyone’s heard of one night stands...we’ve probably all had one. BUT what was this girl thinking? Who goes with someone to give lap dances and expects to get $5,000 for doing it? No one is that naive.

My thoughts...RUN...but she didn’t. I would have been scared out if my mind.

In the end...she got a HEA. Even though I was afraid she was going to be chopped up.

I really enjoy reading books by J.S. Cooper. Playing with Fire was a good book. Not what you expect have to listen until the end because it keeps you guessing. I really enjoyed it.

I loved this book. This is not a book you think or know what the ending will be like. You won't know until the end. It has a ton of sex, love, and twisted parts you keep you reading!

I couldn’t put this book down until the very last. So many twists and turns in the plots that have you guessing right to the end. It is, though, not for everyone because of the mind games.