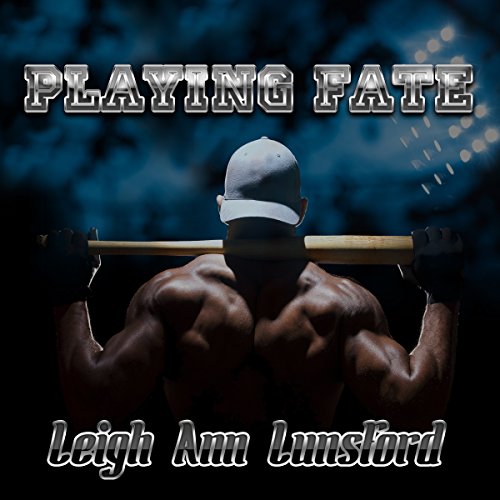 By: Leigh Ann Lunsford
Narrated by: Logan McAllister
Try for $0.00

Deacon Douglas has it all. A loving home, good looks, a fast track to the major league.

But then he makes a mistake. A mistake that would derail most, but not him. He takes the challenge, turns the mistake into another accomplishment. His life it altered - for the better.

Saylor Lewis is just a girl. A girl she doesn't even know. Always the good girl, never rocking the boat, never living for the moment. Until she attends college - out of state.

He's wide open; she's hidden away. He wants her. She just wants success.

She fights. He fights harder. He fights dirty. They each have an endgame...will it be each other?

What listeners say about Playing Fate

I really enjoyed this story. So much so that I went on Amazon to check if it was on KU to borrow it and read along with the audio. The reason being is that I had a hard time with the narration. Having a male narrator do all the voices felt odd.
It was hard to discern who was who at a times. The narrator did the voices for the H and h, but when he was doing inner dialogue, that voice was different and very male sounding. I had a hard time picturing the female lead. And all the voices were very similar. I found myself re-winding the recording several times to figure who was saying what. But despite that, I really enjoyed the story. I would love to hear it with two separate narrators, a male and a female one.

This audiobook was gifted to me and my review is freely given.

I NEED the rest of this series in audio, and I need it NOW!

This is the 1st book in the Endgame Series.

♥ Story ♥
Saylor Lewis wants to make her own way in life so as not to be beholding to anyone. This all stems from childhood issues. The grudges she holds have followed her since age 13. Away at college and living in a shared condo, her resolve is put to the test when she meets the neighbors!

Deacon Douglas has her at hello! Although she has him just as hard. Deacon and the his roommates grew up with the girls so they make a little family that tries to welcome in Saylor no matter how much she tries to resist.

Love and heat ensues, followed by misunderstandings and misplaced loyalties. I know she is going to be a future heroine and probably has good reasons for being a twat nugget, but for this book I really want to punch Emberlee in the throat, face, lady parts, take your pick!

I can’t really say more without giving away stuff that is just too good to spoil. Just read/listen to it!

♥ Author ♥
This is my first read by Leigh Ann Lunsford and I’m hooked! I can’t wait for the rest of this series to come to audio!

♥ Narrator(s) ♥
Logan McAllister in one word, Yum!
Makes Deacon and all the boys sound delicious.
Plus, he does all the ladies just as good.
(Does that sound dirty, or is it just me?)

Audiobook obtained for free at my request and I am voluntarily leaving this unbiased review
More Reviews @ GoodReads Id: AudiobookRomance

It is just too weird to listen to a male voice who doesn’t even attempt to do a female voice while reading the females POV.

I received this book for an honest review.

PLAYING FATE is categorized a college, sports romance, but it was missing something big… the sports and the college. In order to be labeled as such, these two aspects need to be predominantly featured and they weren’t here. I had an issue with skip of time in the first part that makes us miss out on the getting-to-know you par. This took away from the relationship and overall story. I also had an issue with the young characters (18-19 y.o.) acting so much older than they were for the most part.

The group of friends had a really good dynamic that was enjoyable to read. They have a strong bonded friendship. Though oftentimes they didn’t seem to act their age either. These teens just have a lot going on and the way they handled it wasn’t believable. I wish they were aged up at least 5-6 years.

This book went from insta-like to insta-get-into-bed to insta-love, which is fine, but it didn’t flow naturally. The romance was told rather than showed and there was a disconnect all throughout the book. This was a cute story overall with a tiny bit of angst, but it lacked depth. This wasn’t bad per say, just okay.

I love Logan McAllister and his narration always rocks, but when it’s a first person narrative that includes the heroines voice, it doesn’t work. I was so thrown off by a male narrator reading a female character. It’s bad enough when the male narrator has to read a female’s section in a dual pov, but to have one do the entire book is so discomforting. He was great reading the guy’s voices, but he didn’t attempt to change tones/inflections/pitch of the female characters. You really have to pay attention to figure out who’s pov chapter you’re on. This isn’t really his fault for not being able to sound womanly, but it does hinder the listening experience. I think this book would really benefit adding a female narrator.

*I was provided this audiobook from the author/narrator via Audiobook Boom at no charge, for my unbiased review.

What other book might you compare Playing Fate to and why?

These were similar to Lexi Ryan Blackhawk Boys series books to me as it's a similar age of the main characters and the characters are all into college sports. I look forward to the other books in the series being on audiobook.

What does Logan McAllister bring to the story that you wouldn’t experience if you just read the book?

I was voluntarily provided this free review copy audiobook by the author, narrator, or publisher for my unbiased review.

Typically I do not listen to young adult/new adult books. I enjoyed listening to this book. I thought the narrator did a very good performance with the characters since most of them were college age. This book has some great humor and strong friendships, plus an original storyline. The story has some unexpected twists and is very well done. The author was new to me, while I have listened to the narrator before. I received this free audiobook at my request and have voluntarily left this review.

A Million times LOVED this!

This is a new to me author. Wow, I am so pleasantly surprised how much I loved this book. Logan does a great job narrating this one as well. It has been a minute where a book has me giggling like a silly girl but the banter and humor in this was hilarious. There is some angst but not too much. Deacon has just been added to my BBF list as he was all that and then some.The side characters were a huge part to this book and it looks to be a series which I will immediately download on the kindle since this is the only one on audio. This is a sure testament to how much I loved the storyline and the characters. It does have a HEA so you could read this as a standalone but I bet once you finish you will want to read about the others in the story like I do. Well done and it won't be the last book from this author for me.
I was given this free review copy audiobook at my request and have voluntarily left this review.
AudiobookObsession
AudiobooksUnleashed

I have no idea what the writer was thinking. maybe she was excited to write sex scenes. But there is no content. No character building. No story line that makes any sense. worst written book I have read in a long time.

Really enjoyed this book. I was looking forward to this book and was not disappointed at all. This is one of those books you will listen to repeatedly just because it's a really good story with great narration. It pulls you in immediately from the start and never lets go. I was irritated if I had to stop listening for any reason and couldn't wait to get back to the story.

It's creative, original, sometimes humorous, sometimes steamy and very entertaining. It's also worth your time and credit.

Great cast of characters. Both likable and unlikable. They were realistic. They each had a distinct personality and their own set of issues they were dealing with. Normal, typical issues that many young adults face. This made them more relatable and easy to root for. Yes, even Emberly eventually.

I'm looking forward to the rest of the series.

Logan McAllister does a great job with the narration. You can't help but love his voice. It pulls you into the story and brings the characters and their emotions to life. His narration is clearly spoken with a nice even pace. Good character voices. Of coarse his male voices are fantastic. Even though there is not really much difference between his male and female character voices it in no way affected my overall listening enjoyment. Just a slight change in tone was enough to distinguish the characters. I would much rather have just a slight change in a female voice tone instead of the high pitched falsetto some narrators use. He does have a voice that is perfect for dual narration. Very enjoyable

I was given this free review copy audiobook at my request and voluntarily provided this review.

What did you love best about Playing Fate?

How Deacon carried on with his life and the friends who stuck with him throughout.

How Deacon carried on with his life and the friends who stuck with him throughout.

Have you listened to any of Logan McAllister’s other performances before? How does this one compare?

Yes. I have heard him do better. He made the male and female voices sound the same.

I got this ARC via audiobook boom and this is my voluntary review. The book was very well written and I enjoyed it thoroughly.

This was a great listen, very well written and paced. The secondary characters were just as interesting as the main characters; Saylor and Deacon.

I can't wait to listen to more books from this series.

Logan McAllister did a pretty good job, but at times I found it difficult to follow as sometimes there was little to no difference in the characters voices.


“I was voluntarily provided this free review copy audiobook by the author, narrator, or publisher.”