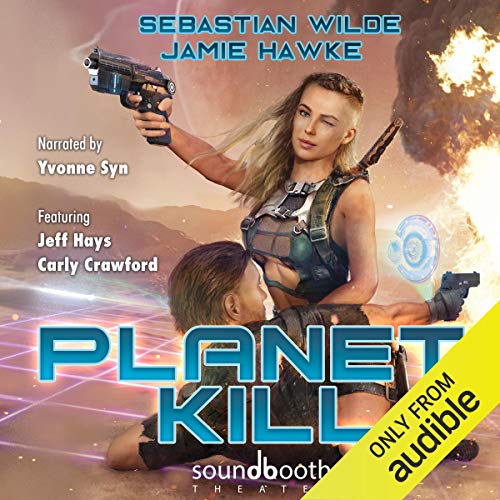 Form your harem. Kill or be killed. Level up and loot. Welcome to Planet Kill.

Pierce has his mission: survive by killing and getting nasty, doing whatever it takes to find his lost wife and others who were abducted and forced to participate in the barbarity that is Planet Kill. In a galaxy where the only way to rise up in society and make it to the paradise planets is through this insanity, he will be up against the most desperate, the most ruthless, and the sexiest fighters alive. Because it's not just a planet - it's the highest rated show around.

Contestants level up for kills, get paid for accepting violent and sexual bids, and factions have been made in the form of harems. His plan starts to come together when he meets Letha, one of the most experienced warlords on the planet. She's as lethal as they come and a thousand times as sexy.

He's able to learn under her, to start to form his own harem. Only, being her ally means fighting her wars. It's kill or be killed, level up fast, and put on the show the viewers want - all while proving to Letha and her generals that he has what it takes to be one of them. The alternative is death, leaving his wife to her fate of being hunted by monsters.

Warning: This audiobook contains gratuitous violence and sex, harems, reverse harems, massively oversized members, breasts galore, and ample blood. You might cringe, you will laugh, and hell, you might even cry. We refuse to apologize for any of it.

What listeners say about Planet Kill


Planet Kill is one of those books that makes no bones in regards to what it is about. This is an action packed, shoot ‘em, screw ‘em, smoke a cigarette style book. It doesn’t pretend to be Shakespeare in the Park or a Hemingway machismo filled tale of woe. This is a summer action flick from the 80’s minus the MPAA ratings. In this flick the action is cranked up to 11 and the sex to 69. This is a popcorn book through and through, and the only thing I think Hays missed doing was giving the character of Trunk and Arnold styled voice, because that would have really fit that character. So, if you are fan of blood, bullets, bombs, and BJ’s this book is for you, and no, I can’t believe I just said that line; but it is true.

The book centers on two protagonists, one male and one female. Pierce, the male, is an agent who is seeking his wife whom he believes was kidnapped to the Planet Kill, which is like a 24 hour Hunger Games program in which viewers can send tips or offer incentives for doing various deeds ranging from assassination to assblastin a nation. God help me. I can’t not not stop doing this. In other words perform various carnal actions for some cash. The players on Planet Kill can earn XP for performing these tasks as well as some cash. Cash allows you to buy or upgrade weapons and armor. Survive long enough on PK and you are set for life. You’ll never want for anything again. Most people volunteer, but it seems that some have been volunteered against their will. The other protagonist is Leetha, a hardcore chick who knows her way around and can handle anything thrown at her. She wants to come off as hardcore, but she really cares about her people, and is just doing what she can until she manages to earn enough xp and credits to get off that rock.

The book rocks back and forth between acts of violence and sex; ah sax and violins, what awesome music they make together. Again, what I like about this is that there is a legitimate reason for the killing and the sexing. These are all actual components that are integral to the planet itself, and the players have no choice but to get busy livin’ or get busy dyin’ or getting it on, sometimes both at the same time. So, it isn’t just arbitrary acts occurring like in some books where you have someone fight, have sex, fight, have sex, have sex, have sex, then fight again. There is a reason every time someone gets ganked, shanked, or spanked. To me that is really important. I don’t need a Dear Penthouse letter every book I get. This is more of HBO unleashed, with more sex and murder than every episode of Game of Thrones thus far. That means it is a fun wild romp. It is also a Harem book, I guess what with the character of Leetha having both men and women in her group that it would count as a harem, so no need to debate if it is a reverse harem. At best it is a harem, at worst it is a mixed Harem book. Either way fans of harems will be happy. Just be aware not all of the harem manages to survive all the way through the book, and that is my favorite thing about the book. The book is called Planet Kill, and characters die. That is really a must, and I would have liked to have seen even more bodies stacked, packed, and racked by the end.

As for the narration of the book, we get two new members of the SBT team, Carly Crawford and Yvonne Syn. I was, at first, a little shocked and disappointed that neither Annie nor Laurie was involved, but these two really acquitted themselves superbly. They make a fine addition to the SBT Squad, and I’m beginning to notice that Jeff might be building his own Harem over there at Soundbooth. Regardless of what Jeff is doing with his people the stuff that he is creating at SBT keeps getting better and better. The sound effects are really expanding what can be done in the audio business, and I would love to see even more used. Keep it up, SBT team. You guys are planet killing it. What I can’t make a pun? Buzz off!

As seen on the LITRPG AUDIOBOOK PODCAST, please check it out on Youtube.com

I wasn't sure how it would end at first, but I loved listening to every minute of it. The world was well made and the characters were also equally so.

this one was pretty

I truly have enjoyed everything so far I’ve listened to by these excellent voice talents as well as the writing by this fine author. I still like Hell’s Rejects series the best, but that is a non sex version more action version from these books. The only reason I choose to give four stars as a total score is because honestly I find it unpleasant to hear a female voice use such vulgarity. I’m no prude by any stretch, but I’ve always felt this in real life, and I feel the same listening to these talented voice actresses say the word f*** or mother f****** and other such terms. It isn’t hurting the story etc., it just bugs me a bit. Just like there a few words I never use myself because I have a difficult to explain strong dislike for those few words. Perhaps it’s because in my world I equate profanity with stupidity? I don’t know as I curse up a storm when needed. I just don’t use such words in basic conversations. It’s just me I know, but it’s why I chose to write and explain my rating. I have enjoyed the vocal talents of Jeff Hays which is how I found this author and all of his books doing a search on Jeff Hays on the Audible website. I think this ‘new breed’ of performers instead of just readers of any type of action oriented novel has been a terrific improvement. I started back in the beginning days if books on tape when they were on reel to reel tape and it was just someone boringly reading the words written. I think this old idea of what used to be radio dramas done by several voice artists and a sound effect person brought back into fashion with young people and up to date technology to handle FX and even add extra spice to some vocalizations is wonderful. Rare for me is the time when something revised from the past is done as well or even better, but this group of artists and a few others not in this troupe have taken the next step forward to make audiobooks as entertaining and sometimes MORE entertaining than anything on TV or in the movie theaters. I hope there will be a next book from where this book ended like the others have by this author. And now we know wheee the biggest cock in the Jamie Hawke galaxy is...he Trunk on PK! LOL. I honestly can’t imagine that guy as part of an orgy. LOL. Thanks for the fun story and well done performances!

It’s ok book. For me, I feel like the introduction of the main character a a bit too long. Overall, this book worth a try.

the characters are very 1 dimensional, and story lacks any true depth but it's a fun book to listen to for what it is.

Halfway through and we are still getting exposition. Filling up the word count blah blah.

not bad. worth a listen

so Leatha is a queen love her and her crew but Pierce is kind of the worst up till the ending and even then I was not super happy with him. I look forward to the next book and hope they can keep it going.