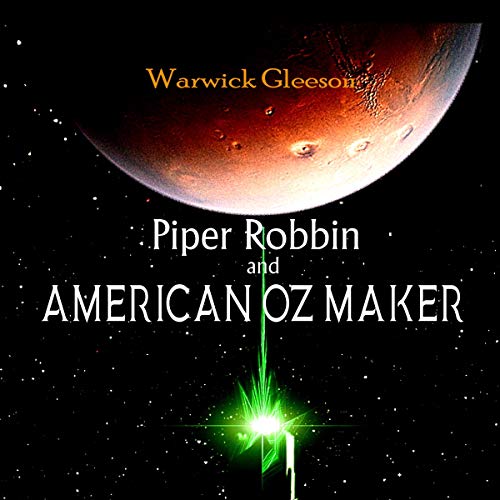 By: Warwick Gleeson
Narrated by: Daniela Acitelli
Try for $0.00

It is the end of history, the end of sanity, and for those who survive, the end of life as they know it. The age of Oz in America is forged for the protection of all, but America rebels, and death on a scale unimaginable becomes the order of the day.

Piper Robbin and the American Oz Maker is an adult fantasy that takes one of world's favorite tales and transforms it into a dark and epic landscape few can escape much less understand. Imagine Potter meets Avengers in Emerald city and you're getting close.

After a magical hostile from Orion falls to Earth and proceeds to play cat-and-mouse with the human race, the 21st century's greatest sorcerers create a network of seven Oz-like city worlds designed to protect everyone from the alien entity. But the alien is far more powerful than anyone suspected. Piper Robbin, ancient daughter of the Earth's greatest sorcerer inventor, Edison Godfellow, must sacrifice all to defeat the implacable force that calls itself "The Witch Queen of Oz", and quickly, before Earth becomes only a cold cinder floating among the stars.

What listeners say about Piper Robbin and the American Oz Maker

I have been an Audible subscriber since 2005 and have over 1200 titles in my library. I think this is only the 2nd time I've ever written a review, and like the previous time, it's because I saw that the only review posted for a book I liked had trashed it so I felt compelled to offer my very different perspective.

Piper Robbin is an extraordinarily creative fantasy, utterly unique, beautifully written. Yes, it does contain a lot of pop culture references--as is often the case in great fantasy and sci fi. Also like other great fantasy, it establishes a new world with a lot of unique imagery and concepts--which is why you may want to download the Audible PDF of the glossary that the author also includes at the beginning of the print edition.

There are over a hundred reviews for this book in Amazon--most of them overwhelmingly positive; I'm not going to repeat what you can read there. I will say that the narration of this book seemed a little slow to me, but I had read the print edition first. I expect that the otherwise-terrific narrator was just enjoying the richness of the language--this author has a way with words you will not find anywhere else. But anyway, if the narration seems slow to you, just speed it up to 125% as I did and you'll be happy with the result.

This book was just bad. The performance made a mediocre story even worse. The author seems to take a lot from pop culture which to me shows a lack of creativity. The book just was a disappointment to say the least.