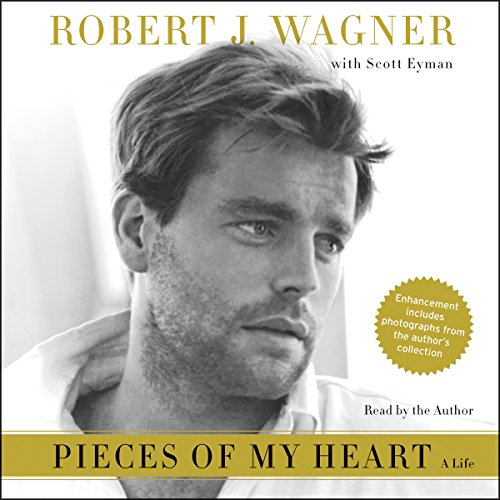 Pieces of My Heart

A moving, candid, and deeply personal look at the triumphs and tragedies, loves and heartbreaks of one of Hollywood's most popular and enduring stars.

Handsome, suave, and sophisticated, Robert J. Wagner has starred in more than 100 films and television series over the past 50 years. In this deeply personal story, he recalls his rise to stardom. He talks candidly about his relationships with some of the greatest stars of the 20th century, including Clark Gable, Spencer Tracy, Frank Sinatra, Elizabeth Taylor, Barbara Stanwyck, and, for the first time, he shares the details of his two marriages to Natalie Wood. Wagner also offers a fascinating look at Hollywood during the last half of the 20th century.

What listeners say about Pieces of My Heart

This is an interesting autobiography. Mr. Wagner narrates his story himself (and sounds more like a 30-year-old than a 78-year-old; his voice has not aged at all), and he does a fine job with it. It's also a generous autobiography, in that Mr. Wagner is more interested in chronicling what went right with his life and praising those who helped him and those whom he loved and loves (Natalie Wood, Jill St. John) than tearing people down.

The only problem is that this is an abridged version, so some parts will leave you puzzled. Out of left field there's a comment about Hjordis, Mrs. David Niven; it's clear that Mr. Wagner doesn't think she was good for David Niven, but why? The answer is doubtless in an abridged part.

Some critics over on Amazon.com have said that Mr. Wagner doesn't say enough about the night of Natalie Wood's death, but the account here is plausible. And please--can't the public let this go? It must have been difficult enough to write about (and narrate) this part without going on for a long time about this painful episode.

There were few downbeat moments in R.J. Wagner's life story reading. His voice seems as young and vigorous as ever and he has many interesting things to relate about his 60 years of interacting with Hollywood's famous, from caddying for Clark Gable to his television years in Hart to Hart. There is more to his life than his marriages to and loss of Natalie Wood.

The title says it all

What a wonderful experience listening to Robert Wagner tell his love-life story. Loved every minute of this listen, but so still sad to this day at the loss of Natalie. This book and narration is so rich. The picture on the cover and the title say it all. I loved the history again of the good part of Hollywood, and the Golden Era, and this was sheer enjoyment and such extremely good writing. This was the 2nd of his three books I listened to, and I recommend this one 2nd after You Must Remember This. Listening to his familiar voice was such an added perk and brought such depth, but what would you expect from Robert Wagner but total excellence?

I really am glad I bought this book!!

I'm glad to have finally read the truth. Mr. Wagner waited a long time to tell his side, but it closed the door on what really happened with Natalie Wood and his family. He covered all the stories that were out there with the truth. You will know it's the truth, because he didn't deny any of them. I ended his book with a renewed respect for him and what really happened.

This book was fantastic. Very real and honest. Mr. Wagner was a wonderful narrator and many times you could feel the emotion coming through. I've already purchased his other two books and can't wait to start those.

If there would have been a little less abridging, I might have given this 5 stars all around. That said, Robert Wagner's voice is easy on the ears. I've listened to it several times and enjoyed it each time. I'm glad I have the hardcover, though, because you get some juicy stories that aren't included in the audio version.

This is more than just a story of the actor's life. He shares some interesting anecdotes about stars he's known. Some might accuse him of name-dropping, but I thoroughly enjoyed it.

An absolute delight! The second time round, and it was as enthralling as the first go.

Amazing story told by an amazing actor! The whole book is captivating . One of the best I have heard!

This book was magnificent, just like the author himself. I had read this probably three times but hearing his voice made it so much better. He is sincere and honest and his warm and loving self. It was written beautifully and narrated to perfection. I have always adored Robert Wagner and now, if it’s possible I adore him more. A fine upstanding gentleman and most of all a gentle man.

Over all a good read with a few exceptions..

Although I thought it was a very good book, Very truthful and heartfelt, after reading a few different accounts of his relationship is Stefanie Powers, I felt like he was a little bitter because she felt that Hart to Hart had run its course and didn't want to continue, he cut off their friendship because as a result it cost him 10 million dollars. Money isn't everything RJ.