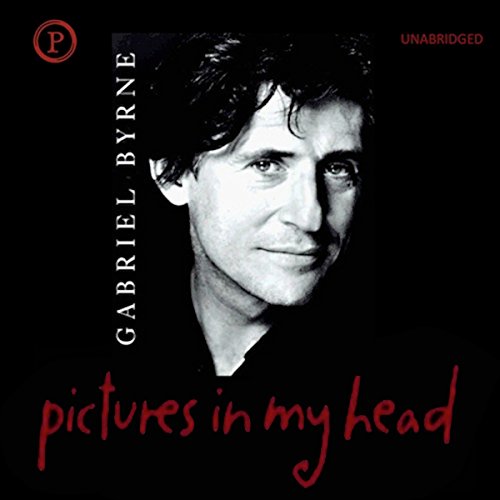 Pictures in My Head

Dublin-born actor Gabriel Byrne shares his life in this frank and absorbing collection of memories and episodes. He leads you from his youth through his career on stage and screen and his current work as a producer and actor. Along the way, he gives his impression of Hollywood, New York, and his native Ireland, and provides insights on famous actors such as Richard Burton. His unique narrative style, a blend of colloquial dialogue with evocative descriptions, provides an intimate account of the man - and the writer - behind the actor's many faces.
©1994 by Gabriel Byrne (P)1995 Dove Audio, Inc.
Entertainment & Celebrities
Show more Show less

"[With] sharp wit he tells hilarious stories about acting and displays a wicked facility for mimicking Irish speech....A fine reminiscence that will have the reader calling for more." (Publishers Weekly)

What listeners say about Pictures in My Head

If you were only fan of Gabriel Byrne before listening to this.. you will be in LOVE with Gabriel Byrne after hearing it!! I LOVE the book and I LOVE hearing him reading it!! BUY THIS!!!!!!

Would you listen to Pictures in My Head again? Why?

I would listen to Pictures in My Head again because it was so intriguing to learn about how Gabriel Byrne grew up and faced his challenges in life. It provides not only an insight into his life, it also gives you an understanding of his mind and his thinking. Well, and his voice with the thick Irish accent is just one of a kind. I am so glad he narrated this audio book himself. This is very unique and valuable.

The level of detail took me on a journey to Ireland and into the mind of Gabriel Byrne.

Have you listened to any of Gabriel Byrne’s other performances before? How does this one compare?

I listened to the audio interviews that are available here at Audible. They complement the information that you get about Gabriel Byrne, but this audio book is clearly the best listen.

HIs childhood experience with his awful school teacher and how she torn down the flowers that he brought into school for... listen yourself!

I am glad that Gabriel Byrne published and narrated Pictures in My Head.

Byrne is a gifted storyteller.

If you could sum up Pictures in My Head in three words, what would they be?

What was one of the most memorable moments of Pictures in My Head?

When poor little Gabriel has his first encounter with the nun at Catholic school. The way she treated him broke my heart.

This book will make you laugh and cry. Byrne has a talent for observation, and he describes minute details that few people would pick up on, and they add great depth to his stories and descriptions. He's a gifted storyteller and wonderful writer. You don't need to know anything about him as an actor to enjoy this book. He reads the book himself, which is an added bonus. Without him narrating, it woudn't be nearly as entertaining. He's a treat for the ears, the mind, and the heart.

Would you listen to Pictures in My Head again? Why?

Those pictures come to life. Whether it is through the wondering eyes of a boy or through the searching eyes of the man, always looking with the eyes of love and compassion.

Well, the author, because there is no hint of sarcasm or cynicism in the book, even though the book is quite honest.

What does Gabriel Byrne bring to the story that you wouldn’t experience if you just read the book?

It's much better than just reading the book because of the way he brings the words to life.

There are moments he made me laugh out loud, but there are also moments that really moved me.

Well worth the listen and much better than the average celebrity biography.

Fall in love with the Irish brogue

This is not so much an autobiography, although there are autobiographical features, rather it is Gabriel Byrne recounting random pictures in his head of his experiences in life, whether in Dublin or New York. My mother came from the same part of Dublin as himself so the accent and story telling of the Irish community had a poignant familiarity to me. This is one of the best examples of an author reading their own works that I have come across. Byrne has an incredible facility for impersonation. If you're looking for a straight autobio from Byrne this is likely to disappoint. However if you're looking to listen to an Irishman muse on what's most important in life and the contrasts between their youth and their adulthood then this will appeal. It is a joy to listen to Byrne's voice paint the pictures in his head. It becomes clear that this is partly a gift from Byrne to his children, telling them about the experiences that shaped him.

I have enjoyed Gabriel Byrne over the years. His face and Irish brogue. I'm certain that I would have enjoyed reading this autobiography. But to listen to him tell it - not just in his own words but also with the expression that only his true experiences could impress - made me enjoy it even more!

Pleasantly surprised - not your average memoir

What made the experience of listening to Pictures in My Head the most enjoyable?

Hearing it in the author's own voice, with his wonderful vocal talent.

Gabriel - as a child. I wanted to reach back through the years and hug him

How he brought his acting skills into the performance with the vocal changes for each character (it was like the actual people were there in the room with him). His occasional singing and poems - wonderful.

"The many lives I've lived and encountered"

If you're expecting a typical movie memoir of who's who's then you'll be disappointed. However it is rich with wonderful stories of Gabriel's upbringing, but also including the horrible treatment of the Nun at school, his various jobs before getting into acting as well as his own poems and reflections of those who have touched his life. He is very much a great writer, as far as I'm concerned and should write more!

Highly recommended. Very easy on the ear, for me at any rate. I imagine though, if you're not familiar with the Irish accent, it might take some time to get into it. But it is well worth the effort.

What would have made Pictures in My Head better?

Would you ever listen to anything by Gabriel Byrne again?

It is probally good to his people but I just had no patience for it.

Such a beautiful sensual and sensitive glimpse into the life of this artist and the wonderful people and landscapes that shaped him. A gift of a book. Gabriel is a wonderful writer.

brilliant but get real

Gabriel needs to update his views on knackers, who are now flooding the country with drugs, take off the beer googles Gabriel.

His next memoir Walking with Ghosts is truly amazing. this much earlier book is a sign of things to come. Enjoyed very much. A very talented performer and writer.