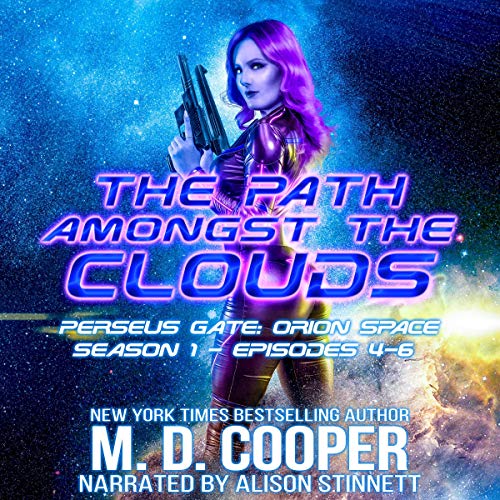 Perseus Gate Season 1 - Episodes 4-6: The Path Amongst the Clouds

This is an omnibus edition of Episodes 4-6 in season 1 of the Aeon 14 Perseus Gate series.

The Last Bastion of Star City

Jessica had never imagined such a place as Star City existed, let alone that something like a Bastion protected it.

With Serenity behind them, the crew of Sabrina now faces a vast nebula, rife with dark matter, stretching along the inner edge of the Perseus Arm. Going around will take years, but there is rumor of a path through. A path known only to those who live at Star City

But Star City is interdicted, its outer reaches patrolled by Orion ships. Though Misha knows of a hidden FTL route that can get a ship close enough to the city, using it assumes the city’s inhabitants are friendly.

Jessica and Trevor risk the pathway, travelling to Star City where they find something far more amazing than they ever expected-only to learn they must make a sacrifice unlike any they had ever dreamed.

The Toll Road Between the Stars

No one ever said that travelling ten thousand light years would be easy.

Sabrina and her crew are nearly through the Stillwater Nebula. But before they pass through into the open space beyond, they have to get through the Perry Strait. A stretch of space where no FTL is possible, with the Perry System at its center.

There they learn that an old enemy has leapfrogged them and laid a trap. A trap they're going to have to spring if they want to get through to the other side.

The Final Stroll on Perseus's Arm

An old foe from Finaeus's past reveals a secret that will save the crew.

It has been eight long years since the crew of Sabrina passed beyond the Stillwater Nebula. They are now deep within the Orion Freedom Alliance, taking a short respite on the planet Ferra, roughly 500 light years from the inner edge of Orion space-only a year from the relative safety of the Inner Stars.

But when Cheeky is abducted, everything is turned on its head once more, and the crew learns of secrets the Orion government had tried to keep under wraps for millennia.

Now they're in a race to save Cheeky, and take advantage of an opportunity they thought never to see again.

What listeners say about Perseus Gate Season 1 - Episodes 4-6: The Path Amongst the Clouds