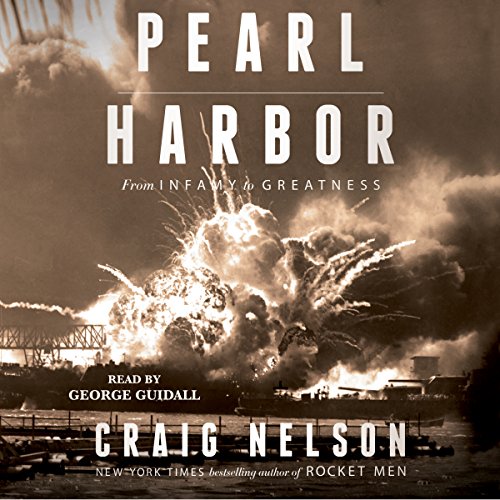 By: Craig Nelson
Narrated by: George Guidall
Try for $0.00

Published in time for the 75th anniversary, a gripping and definitive account of the event that changed 20th-century America - Pearl Harbor - based on years of research and new information uncovered by a New York Times best-selling author.

The America we live in today was born not on July 4, 1776, but on December 7, 1941, when almost 400 Japanese planes attacked the US Pacific Fleet, killing 2,400 men and sinking or damaging 16 ships. In Pearl Harbor: From Infamy to Greatness, Craig Nelson follows, moment by moment, the sailors, soldiers, pilots, admirals, generals, emperors, and presidents, all starting with a pre-polio assistant secretary of the navy, Franklin D. Roosevelt, attending the laying of the keel of the USS Arizona at the Brooklyn Navy Yard, against the backdrop of the imperial, military, and civilian leaders of Japan lurching into ultranationalist fascism, all culminating in an insanely daring scheme to shock the Allies with a technologically revolutionary mission in one of the boldest military stories ever told - one with consequences that continue to echo in our lives today.

Besides the little-understood history of how and why Japan attacked America, we can hear the abandoned record player endlessly repeating "Sunrise Serenade" as the Japanese bombs hit the deck of the California; we feel terror as navy wives, helped by their Japanese maids, upturn couches for cover and hide with their children in caves from a rumored invasion; and we understand the mix of frustration and triumph as a lone American teenager shoots down a Japanese bomber. Backed by a research team's five years of efforts with archives and interviews, producing nearly a million pages of documents, as well as a thorough reexamination of the original evidence produced by federal investigators, this definitive history provides a blow-by-blow account from both the Japanese and American perspectives and is a historical drama on the greatest scale. Nelson delivers all the terror, chaos, violence, tragedy, and heroism of the attack in stunning detail and offers surprising conclusions about the tragedy's unforeseen and resonant consequences.

What listeners say about Pearl Harbor

From Nadir to Zenith

The story is well organized and thoroughly written. Hugely satisfying in the end to revisit this pivotal moment in history. That said, there were issues. I almost did not make it past the first half of the listen. The audio was annoying. Every 30-40 seconds the timber of the narrator voice changed significantly. It seemed there were either multiple speakers or the narrator was struggling. It was finally apparent that either the recording equipment was sub-par or the media used was poor or damaged. Being early on, the author was relating a lot of mundane but required details about the characters involved. It was tedious. With all that, I am glad I stuck with it as the audio improved at the time the story fully blossomed. The personal stories detailing the events made it personal in a way other books have not accomplished. It’s a must listen. And the story is deserving of being either refurbished or a new recording.

If you know nothing about Pearl Harbor, do not buy this book it will misinform you. If you know anything about Pearl Harbor in particular or the War in Pacific in general this book will anny you.
Unlike other reviewers I found the narration compelling and the writing very good. Before listening to this book, I would say George Guidall could make any book worth listening to. I can no longer say that. The author makes several technical errors ( for example he speaks of Japan sinking Russian dreadnoughts in 1905 while in fact there were no dreadnoughts at Tsushima in 1905, the ship that gave its name to the class was not launched until 1906, Mayor Cermak was shot with a handgun, not a rifle, in the attempt o FDR's life and the Japanese 24 inch torpedo was not 2 feet long but 24 inches in diameter--its actual length was 9 meters, a little of 29 feet).
I stopped listening however when Mr. Nelson stated the Japanese invasion of Malaya and Dutch East Indies occurred in September 1940 as well as the total occupation of French Indochina . How he came across this information is baffling. The reason Japan attacked Pearl Harbor is that Japan feared that if invaded those territories then the USN would use the Philippines as a base to attack Japanese supply lines. If the US had stood idly by when these colonies were seized ther would be no need to attack the USN at Pearl Harbor.
In sum whatever new insights the author brings to the table can not be given credence due to very basic historical and technical misinformation.

From Nanking to the deck of the Missouri and the wars end. A wonderful examination not only of the attack (though that's exhaustively documented) but of the far reaching implications of Imperial Japan's foreign policy decisions. With primary source accounts from both sides it's a gruesome yet compelling look at the defining moment of 20th century American history.

Worst recording ever from audible

I have downloaded dozens of books from audible. Undoubtedly, this is the absolute worst recording I've ever listened too. Bad audio, glitches, varying speed. I deserve my money back on this one. I was interested in the subject matter or I never would have made it to the end. Terrible.

My father's war. He was in the European theatre...because of Pearl Harbor. Excellent presentation of all aspects of this momentous event. We should learn from this and be better for it.

I was going to express some concerns that the truth of what happened that day and during the duration of the war in the Pacific are forgotten, not taught in school. I'll keep my comments to the book. Incredible details. The failure of our leadership was a sad chapter in the history of our military. The heart of the men at Pearl Harbor was shown to be without equal.

Listening to this book will help you to better understand were our faith and trust should be placed and it most certainly is not in government. It should be placed in knowing that, God forbid, something as bad or worse could happen and it would be the men and women in the military who will be there as they always are.

To the person whose review included he will never listen to another book read by George Guidall, please search his name and look at the over 800 books you have just crossed off your to do list. I often search for a new author by searching his name.

Narrator makes it hard to finish

This book has so much information about the Japanese and what lead up to Pearl Harbor. It’s hard to listen to with this narrator. Guidall sounds like robot, very monotone and boring. The information began to just blend because of his voice.

I have listened to this book twice. Just an amazing collection of knowledge from the Pacific front of WWII. So much detail that I haven't heard before.

I was fairly ignorant about the facts of Pearl Harbor. I wanted a book that would help me understand the time and what lead to it. This book did that for me. It placed me in the White House, in Tokyo and of course in Hawaii. The narrator was excellent in my opinion.
Highly recommend it!