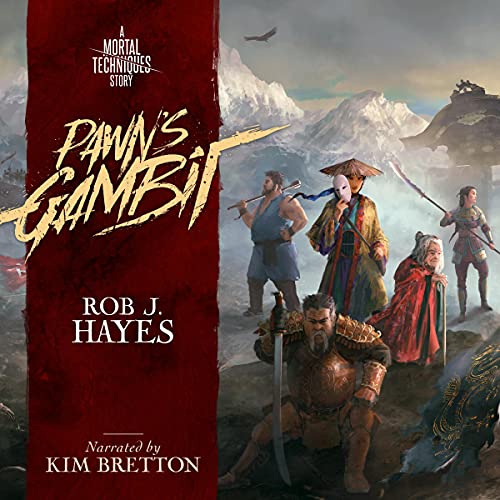 Yuu wants nothing more than to forget the mistakes of her past. The Gods have other plans.

Once a renowned strategist and general, five years ago Yuu made a mistake that cost her everything. Now she is on the run, royal bounty hunters snapping at her heels. But what if there was a way to get back what she lost, a way to bring back a murdered prince?

Every century, the gods hold a contest to choose who will rule from the Heavenly Jade Throne. Each god chooses a mortal champion, and the fate of all existence hangs in the balance.

On a battlefield full of heroes, warriors, assassins, and thieves can Yuu survive long enough to learn the rules of the game, let alone master it?

Pawn's Gambit is a stand-alone story set in the award-winning Mortal Techniques universe. It's a wuxia adventure filled with heroes, gods, spirits, and magic.

What listeners say about Pawn's Gambit

Quite possibly one of, if not the best narrators I’ve ever listened to. Full disclosure, I am a sucker for European accents but Kim Bretton’s performance is top notch.

Pawn's Gambit is gripping and fun

Yuu, once a famous strategist, has found her niche in life - playing chess with old men and drinking herself into a stupor. Formerly known as "The Art of War," she led armies and won battles until her mistake cost her ruler his life. She doesn't seek redemption, just another bottle of wine.

Unfortunately, it can't stay that way, not when the gods play their games with mortal pawns. Natsuko, the goddess of missed opportunities, needs Yuu to checkmate Batu, the god of war, and rise to power. Once a century, the gods hold a contest to choose a new ruler. Each god chooses a mortal champion, and the fate of heaven and earth depends on the winner.

Rob J. Hayes has packed Pawn's Gambit with action and adventure, and even the quieter moments are intense. The sharp and direct writing style makes it easy to follow and enjoy the story. Even though Pawn's Gambit rehashes familiar tropes (quest for powerful artifacts, redemption story), Hayes' confident narration makes it fresh and interesting. He also twists them in a most exciting way.

Hayes does a lot of things right in Pawn's Gambit. The first is characterization. Yuu and Natsuko have unique perspectives (Yuu human, Natsuko inhuman) and personalities. Their interactions drive the story forward and make it so fascinating to follow. Natsuko toys with mortals, but she respects them. She loves walking through the mortal plane as an old woman because she finds it liberating to be the curmudgeon. As a strategist, Yuu has learned to remain cold and think of troops as numbers rather than individual lives. She knows she shouldn't consider the consequences of her actions because the end justifies the means, but she doesn't quite succeed. I found her more introspective moments insightful and engaging.

Secondary characters have whimsical names (The Ticking Clock, Laws of Hope, etc.) and possess a variety of supernatural abilities that make their encounters explosive and intense. Expect lots of blazing action, cool magic, breakneck pacing, and relatable and well-developed characters doing what they have to to survive.

The combination of an engaging plot, excellent pacing, good dialogue, fleshed-out characters, and economy of language enhances the reading experience. Pawn's Gambit is gripping and fun, and I'm sure it'll keep most readers glued to the pages.

The narration: I listened to the audiobook version of the book. Kim Bretton was a great choice for the narrator - she captured and shaped the tone as needed, and gave the right portrayal to each character.