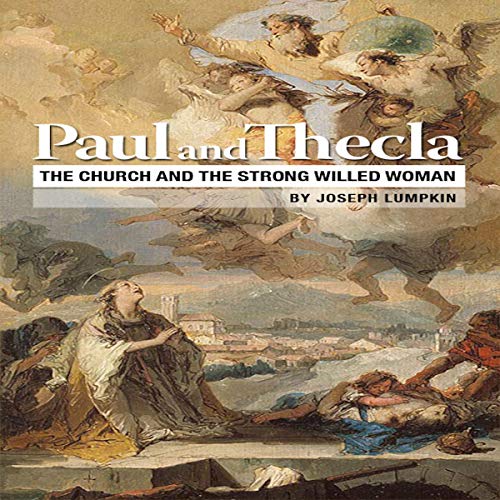 Paul and Thecla: The Church and the Strong-Willed Woman

By: Joseph B. Lumpkin
Narrated by: Tom Prodehl
Length: 2 hrs and 3 mins
Categories: Religion & Spirituality, Christianity
3 out of 5 stars 3.0 (1 rating)

Paul and Thecla: The Church and the Strong-Willed Woman

By: Joseph B. Lumpkin
Narrated by: Tom Prodehl

The Acts of Paul and Thecla was written around 150 CE when there was a growing body of work attributed to the apostle Paul. Owing to the abrupt beginning of the work, it is thought The Acts of Paul and Thecla was part of a larger texts and was extracted to form a stand-alone work. Reasons given for its omission from the Bible are numerous. It was thought to have been written after the apostolic age; it gives high and powerful position to women in the faith; it urges women to withhold sex from their husbands and live chaste lives.

Within its storyline Thecla seems to eclipse Paul in her courage and commitment to the spread of the Gospel. The text presents an unwavering stance on the virtue of celibacy preached by Paul and amplified by Thecla. In addition, Thecla is presented as a strong willed woman who took it upon herself to preach, teach, heal, and baptize, all without permission or oversight from a man. In the age when canon was being decided, women in positions of leadership within the church was an anomaly, and the idea that a wife could decide her own fate, and even withhold sex from her husband, was looked on as heresy and insolence. These were social constraints which tainted the interpretation of scripture, both then and now.

We will examine the true place of women in the Bible and how translators diminished the place and accomplishments of women by mistranslating words and phrases. We will look at the true meaning of many Bible verses, as well as the complete text of Paul and Thecla, with an eye toward how women were a driving force in religion and family in the early church. In the end, a more true and just vision of women of the Bible and of ancient times will be revealed.