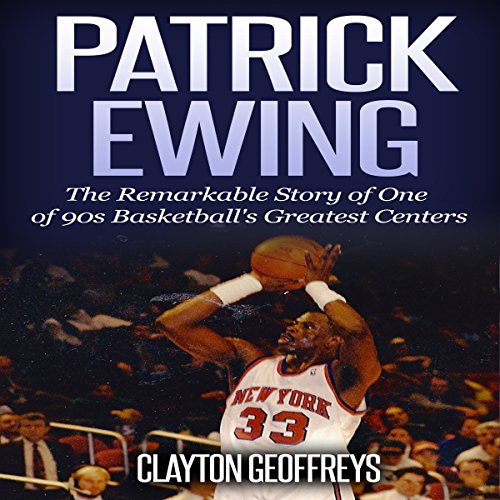 In Patrick Ewing: The Remarkable Story of One of 90s Basketball's Greatest Centers, you'll listen about the inspirational story of basketball's premier center, Patrick Ewing. Patrick Ewing defined New York Knick basketball from the 1980s through the 1990s. In an age filled with greats like Michael Jordan, Karl Malone, Patrick Ewing, Reggie Miller and John Stockton, Ewing played in one of the most exciting eras of modern basketball. The New York Knicks had quite a few deep playoff runs during Patrick Ewing's time with them.

A hall of famer, Patrick Ewing drew fear from opposing teams when it came to scoring in the paint. The New York Knick defense was grounded behind Ewing's efforts every night in Madison Square Garden.

The book read like a list of facts, with very few interesting storylines and no flair in the writing. Other books about Steve Nash, Arnold Schwartzenegger, and others provided interesting stories, not just a basic biography.

Has Patrick Ewing turned you off from other books in this genre?

No, just this author and reader.

I'm a big Ewing fan and have enjoyed other books about players from my high school era - I couldn't wait to get back and listen more - but this was boring. It provided facts about Ewing's life, but that's about it. It would have been a great encyclopedia entry, but neither the writing nor the reading provided any flair or anything that kept my interest.