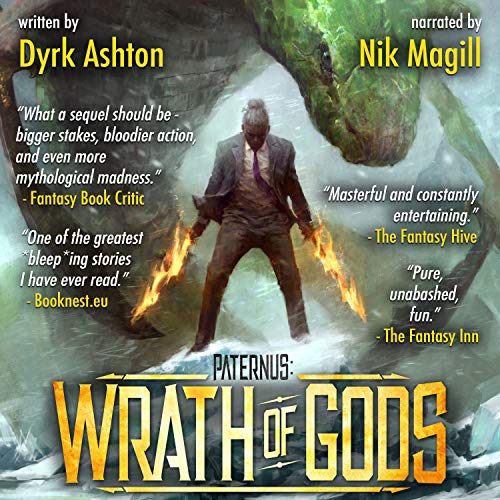 Paternus: Wrath of Gods is the highly anticipated follow-up to Dyrk Ashton's critically acclaimed, Amazon number-one best-selling novel Paternus: Rise of Gods and the second book in the Paternus Trilogy.

"What a sequel should be - bigger stakes, bloodier action, and even more mythological madness." (Fantasy Book Critic)

On the run from an ancient evil and his army of terrors straight out of myths from around the world, Fi and Zeke aid Peter in his globe-trotting quest to seek out the remaining Firstborn, uncover the enemy's plans, and gather the warriors of old for what may become the final battle in the world's oldest war. Along the way, Fi and Zeke discover they, too, have strengths of their own - though they come at a cost neither may wish to bear.

"One of the greatest *bleep*ing stories I've ever read." (Booknest.eu)

"A fantastic sequel to Rise of Gods. Five starred this one right out of the gate." (Superstardrifter)

"Even more action packed and entertaining than the first book." (The Nerd Book Review)

"A thrilling ride that you won't soon forget." (Out of This World SFF Reviews)

"Readers will be swept up in the relentless pace and finding a way to put it down is going to be a challenge." (Grimmedian)

"I described Book 1 as a roller-coaster ride. Book 2 is the rocket-fueled version." (Phil Parker, author of The Knights' Trilogy)

What listeners say about Paternus: Wrath of Gods

Completely epic. Better than the first
Can’t wait for the next one
Three more words

All 3 books in this series are great. I highly recommend them all, you won’t be disappointed.

the entire book was non stop from the start. how the author encompasses close to all religion and mythology in the world. he does it in such a way that is enjoyable and will allow the characters to become near and dear to your heart.

Such an amazing book, it introduces the evolutionary/longevity of the geological timespans as-well.
Great connection with the information theory of quantum mechanics!
Great read, can’t wait for the finally!!

Myth unbound and unleashed. Timeless. Epic. Cinematic. Worth it!

The story unfolds and the plot thickens. I loved this. an easy 5* from me. More background about the universe, let alone the characters. World hopping and destruction on a universal scale, this sequel steps it up a gear and no mistake.