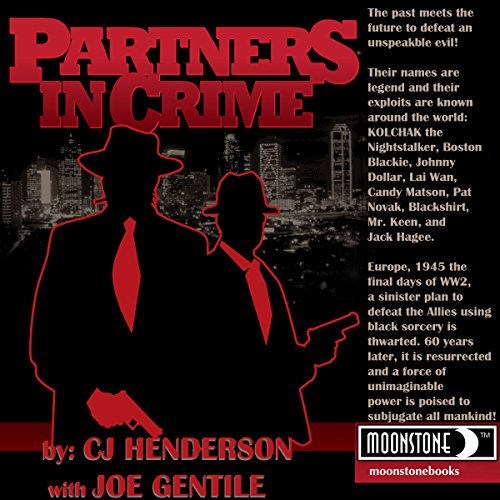 The past meets the future to defeat an unspeakable evil!

Europe 1945, the final days of World War II. A sinister plan to defeat the Allies using black sorcery is thwarted, only to be resurrected again in a form more terrible than ever before! Now, over six turbulent decades, across multiple continents, and through the darkest alternate dimensions, a force of unimaginable power is poised to subjugate all mankind! Bound by time, a band of heroes will rise! Their names are legend; their exploits are known around the world: Kolchak: the Nightstalker, Boston Blackie, Johnny Dollar, Lai Wan, Candy Matson, Pat Novak, Blackshirt, Mr. Keen, and Jack Hagee. Now, this amazing group will find themselves pitted against a power that transcends time and space...an evil so corrupt that the fate of humanity may hang in the balance!

What listeners say about Partners in Crime