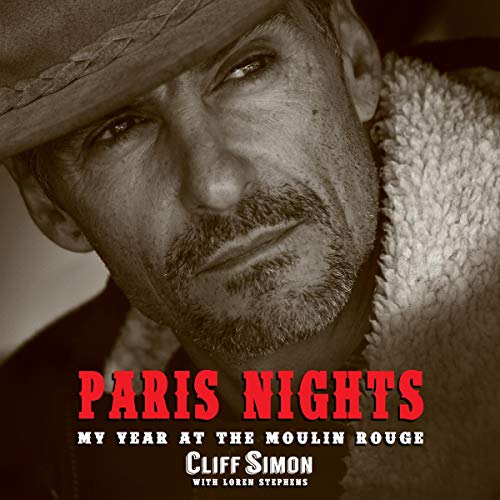 Paris Nights: My Year at the Moulin Rouge opens with a bored 26-year-old Cliff Simon staring out at the ocean from his beachfront house, wishing he was somewhere else. Gavin Mills telephones him from Paris inviting him to join him at the iconic Moulin Rouge. Cliff sells everything he owns, leaving Johannesburg, South Africa for the City of Lights. He learns that his spot at the Moulin is not guaranteed, and is forced to audition. Making the grade, he is put into can-can school before he is allowed into the company. His adrenaline is pumping from excitement and fear, both of which he has faced before.

Taking a look back we see 12-year-old Cliff helming a racing dinghy in the midst of a thunderstorm on the Vaal River. His father yells at him not to be a sissy, and he brings the boat back to shore alone. We then travel to London with his family escaping the tumult of Apartheid. He trains for the Olympics, but drops out, enrolling in the South African military where he subjected to harsh treatment and name calling - Fokken Jood. After a honorable discharge, he works in cabaret at seaside resorts, and is recruited as a gymnast in a cabaret, where he realizes that the stage is his destiny.

The memoir fast forwards to Cliff's meteoric rise at the Moulin from swing dancer to principal in Formidable. Off stage he gets into fights with street thugs, hangs out with diamond smugglers, and has his pick of gorgeous women. With a year at the Moulin to his credit, doors open for him internationally and back in South Africa. He earns a starring role in "Egoli: Place of Gold," and marries his long-time girlfriend, Colette. On their honeymoon to Paris, Cliff says, "Merci Paris for the best year of my life."

What listeners say about Paris Nights

It was great to listen to Cliff Simon narrate his own memoir. I became totally absorbed in his story and life adventures. I felt like I was in Paris... I highly recommend this book and if you listen to audio books - Cliff's narration is great!!!!

Pleasantly surprised by the turn of events. It kept my interest and at times I stopped what I was doing and just listened. I was really happy that he ended up marrying Colette. Cliff Simon should write or just narrate more books. His voice is soothing and calm.