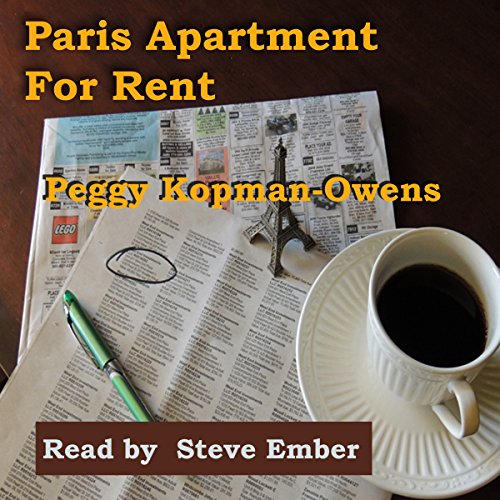 By: Peggy Kopman-Owens
Narrated by: Steve Ember
Try for $0.00

Paris was a property owner's paradise, a place where renters far exceeded the inventory of apartments. So...why had the beautiful young French woman been so willing to offer a perfect stranger, an American, her apartment and one month free rent? Yes. There were less expensive places in the world to live, but Zack's heart was set on a place of his own in the 6th Arrondissement. And yes, it did matter that it was in this particular neighborhood, where Gertrude Stein had lived and Hemingway had walked. It was a mystery, which demanded investigation, but was discovering the neighbors' secrets worth risking eviction? If only he had paid attention in French class. What was he missing in translation? PARIS Apartment for Rent

What listeners say about Paris Apartment for Rent

Start with the travelogue and little French lessons, learn how you might really rent an apartment then delve into the mysteries of the village that is the apartment building, its interesting inhabitants and their unusual extra activities. It tugs at your heart sometimes and really keeps you guessing!

I looked forward to going back when i wasn't listening. I wondered what the characters were doing and i felt really drawn in to the rhythm and style of that small slice of life in Paris.
A very enjoyable read.

A Dive Into French Culture and A Mystery!

What did you love best about Paris Apartment for Rent?

I found great appreciation for the experience of becoming an expat with Zack. The details and explanations of culture made the story real.

What other book might you compare Paris Apartment for Rent to and why?

I honestly do not have one to compare it to. It was different and original.

Which character – as performed by Steve Ember – was your favorite?

Each character was quirky and carried personalities all their own. I believe Dimitri was the one I was impressed with most. He was the sort of guy I'd have loved to hang out with- except when drinking and sleeping with his feet in my face!

I never listen to a book in one sitting. I'm a homeschool wife and author myself. It always takes me two to three days for an audiobook.

The story was very amusing and interesting, but I feel a bit too long. There was too much information on the other characters- though it all worked out. I'll definitely be sharing it with others!

Having always dreamed of an apartment in Paris, the title caught my eye and I read the original book several years ago. It captured my interest from the first page. Mysterious, charming, funny...lots of twists and turns...delightful read. When I saw the audible version was available, I tried the sample and fell in love with Steve Ember's voice. It's my new favorite thing to relax and let someone else read to me! The book was just as much fun the second time!