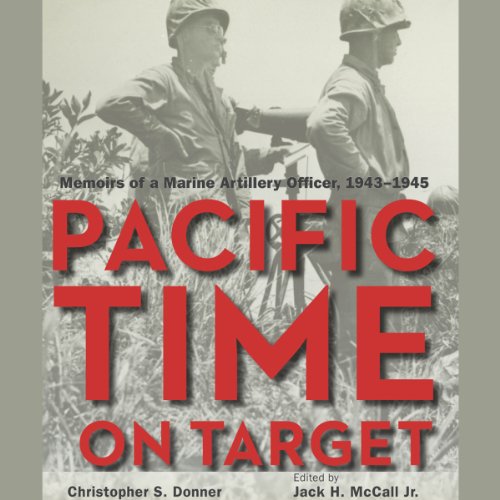 By: Christopher S. Donner
Narrated by: Mike Tanner
Try for $0.00

As a married man and Stanford graduate student nearing thirty, Christopher Donner would likely have qualified for an exemption from the draft. Like most of his generation, however, he responded promptly to the call to arms after Pearl Harbor. His wartime experiences in the Pacific Theater were seared into his consciousness, and in early 1946 he set out to preserve those memories while they were still fresh.

During the spring of 1943 Donner joined the Marines' 9th defense Battalion and saw his first combat service in the campaign for New Georgia in the Solomon Islands. With the end of Japanese resistance in the Central Solomons, Donner's battalion was dispatched in June 1944 to serve in the liberation of the U.S. territory of Guam. When his unit was reactivated and its veterans sent home, Donner was not so fortunate.

In early 1945, Donner was reassigned to the 11th Marines, the 1st Marine Division's field artillery. His new commander decreed that Donner would serve as a field artillery forward observer just in time for the invasion of Okinawa. Teeming with close calls and near misses, frank yet sensitive observations of the brutality visited on Okinawa's civilians, and the horrors of frontline combat, Donner's account of his service with the Old Breed on Okinawa forms the core of his memoir. Miraculously unscathed by the Okinawa bloodbath, Donner was en route to California for his first opportunity for leave when he learned of the atomic bombs and the war's end.

Besides providing a candid, moving contemporary record of the combat experiences of a Marine Corps officer, Pacific Time on Targetis an invaluable account of the harrowing life of an artillery forward observer, as few of these men survived to tell their stories.

What listeners say about Pacific Time on Target