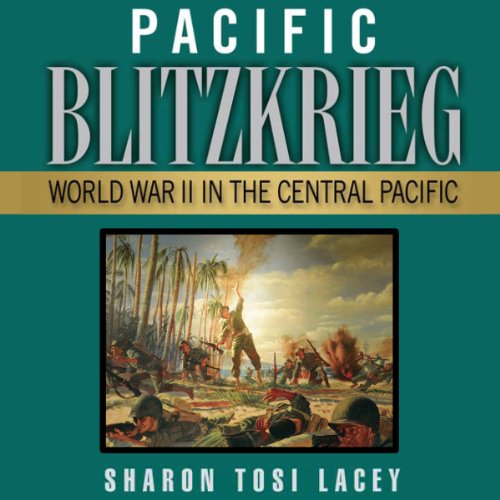 By: Sharon Tosi Lacey
Narrated by: Gary Roelofs
Try for $0.00

Pacific Blitzkrieg closely examines the planning, preparation, and execution of ground operations for five major invasions in the Central Pacific (Guadalcanal, Tarawa, the Marshalls, Saipan, and Okinawa). The commanders on the ground had to integrate the U.S. Army and Marine Corps into a single striking force, something that would have been difficult in peacetime, but in the midst of a great global war, it was a monumental task. Yet, ultimate success in the Pacific rested on this crucial, if somewhat strained, partnership and its accomplishments. Despite the thousands of works covering almost every aspect of World War II in the Pacific, until now no one has examined the detailed mechanics behind this transformation at the corps and division level. Sharon Tosi Lacey makes extensive use of previously untapped primary research material to re-examine the development of joint ground operations, the rapid transformation of tactics and equipment, and the evolution of command relationships between army and marine leadership.

Lacey examines the Smith vs. Smith controversy during the Saipan invasion using newly discovered primary source material. Saipan was not the first time General “Howlin’ Mad” Smith had created friction. Lacey reveals how Smith’s blatant partisanship and inability to get along with others nearly brought the American march across the Pacific to a halt. Pacific Blitzkrieg explores the combat in each invasion to show how the battles were planned, how raw recruits were turned into efficient combat forces, how battle doctrine was created on the fly, and how every service remade itself as new and more deadly weapons continuously changed the character of the war.

"Heavily researched and meticulously presented, Pacific Blitzkrieg's keen, ground's-eye perspective is a welcome addition to military and world history collections. Highly recommended." ( Midwest Book Review)
“Pacific Blitzkrieg is not only a major contribution to our understanding of the Pacific War but is also a delight to read. Lacey demolishes the belief, widely held among students of the Pacific War, that a deep gulf lay between the Marine Corps and the Army.” (Williamson Murray, coauthor of A War to Be Won)

What listeners say about Pacific Blitzkrieg

Excellent work! Details staffwork and leadership issues rarely covered in this depth for any world war two theater. a Must read for anyone wanting to have insights to enduring conflict challenges to training and adaptive organizations. From this point on I will be skeptical of any claims to expertise on the Pacific Theater by anyone who has not read this book or is conversant on the primary source documents it is based upon! a masterfully professional work of military history for practitioners and enthusiasts alike! I must get a hardcopy for reference!!

An honest review of US Marine/Army in the Pacific

Outstanding straight forward and very interesting. Written more like a report than a story this book helps the amateur historian understand why the US won the Pacific Campaign of WWII. Not always pretty and very honest I think this is a must for any fan of WWII or soldiering in general.

A very different study of the war in the Pacific

This book is not an operational narrative of the drive across the Pacific between 1942-45 but rather it is a study of operations and the lessons drawn from them.The book charts the evolution of Army and Marine doctrine and practice.An important study but probably not aimed at the casual listener.