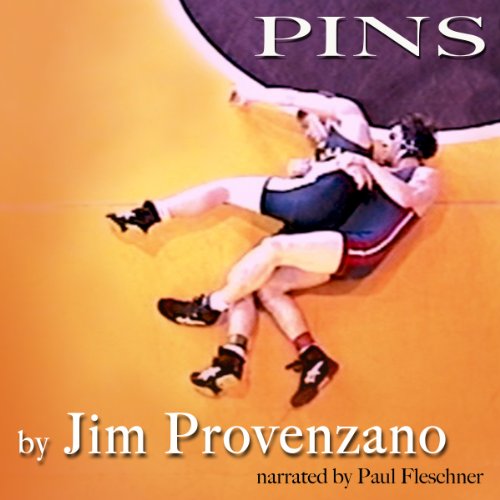 Set in Little Falls, New Jersey in 1993, PINS weaves the classic story of a Catholic saint into a compelling modern life - and near-death - account of Joey Nicci, a fifteen-year-old Italian-American wrestler. After befriending Donald "Dink" Kohrs, Joey and his new posse get involved in pranks and partying that eventually get out of control, resulting in the death of a maligned fellow teammate.

The ensuing legal battle and media frenzy alter Joey's life and his self-perception as a gay teenager while shattering his fragile love for fellow teammate Dink. Like his patron saint, his battle against his own teammates forces him to suffer for his beliefs. His survival becomes a literary miracle. A compelling story of a loving yet confused family, coaches and teachers struggling with multiple issues of violence and homophobia amid the clan-like world of teenage athletes, PINS brings together elements now frighteningly common in the media: bullying jocks, assaults on weaker students, faculty and families unwittingly allowing such behavior.

Called "prescient" and "heartfelt" by two of today's leading writers, PINS layers symbols from the worlds of animals and religion, yet while achieving a unique literary style, it remains accessible to the group for whom it speaks - gay teenagers.

What listeners say about PINS

PINS Has Me in a Firm Chokehold!

What did you love best about PINS?

Have you ever discovered something that is so wonderful and then wondered why you had never encountered that thing before? Both Jim Provenzano (author) and Paul Fleschner (narrator) are now such new discoveries for me. I can only thank Audible for this ideal double-discovery. As I listened --always while dog-walking in August--I am sure that my jaw was slack as I heard the marvelous turning of phrases by the author. Mr. Provenzano has himself wrestled for 14 years, and it shows in his details. He obviously lived the life of a high school wrestler. But his writing...so expressive! Often, I would press pause to savor a sentence or thought. (My dogs grew bored with this as we all stopped to either think, feel, or sniff.) Also, Paul Fleschner's reading is spot-on. It is hard to believe that he is the same person who is capturing all the high school boys, their coaches, parents, and family members--both boys and girls. Every word is spoken with intentional purpose.

Favorite character? I want to say the story's protagonist, Joseph, is my favorite. Being a gay adolescent is so tough--I know all too well--but hearing Joeseph make the same discoveries I had made brought back emotions to me I long tucked away since I was his age.

Which character – as performed by Paul Fleschner – was your favorite?

I think it must be Joseph's dad, Dino. To me, he is the voice of reason which grounds all of the other characters. Mr. Fleschner makes the most of his resonant voice to capture Dino's love for his son.

If you could rename PINS, what would you call it?

I cannot improve upon PINS. It is meaningful to this story on so many levels.

As I write this review, I have about 90 minutes left of the story. This, in dog-walks, is about two. I am already mourning the loss of Joseph and Dink in my life, so I am ready to move onto other books by Mr. Provenzano. My request to Jim is this: PLEASE, "I would get my on knees, but that might be overkill" (taken and paraphrased from the book), PLEASE ask Paul Fleschner to read more for you.

I really liked this audiobook. The narrator was great, and really managed to channel the angst of a teen coming to terms with his sexuality and the fact the the world of grown ups is indeed a messy one.
The story also feels like it could be real — like it could happen to anyone of us. Provenzano capitalizes on the fact that we're all just one or two small mistakes away from life-changing events. I'll definitely listen to this again.

Good... but Could Have Been Great

I found the ending very very weak and incomplete

Could you see PINS being made into a movie or a TV series? Who should the stars be?

Yes, I think it would make a pretty good movie or series.

It was a good story that got lost too many times for my liking. It was kind of like the last season of The Sopranos... I thought a lot of things would get tied up, a lot of story lines that were left danging... but it never happened. There were too many chapters that were there for no apparent reason. If the story was wrapped a little tighter and there weren't so many wasted words, it could have been one of the greats. Still worth a listen, but you're not going to fall in love with it.