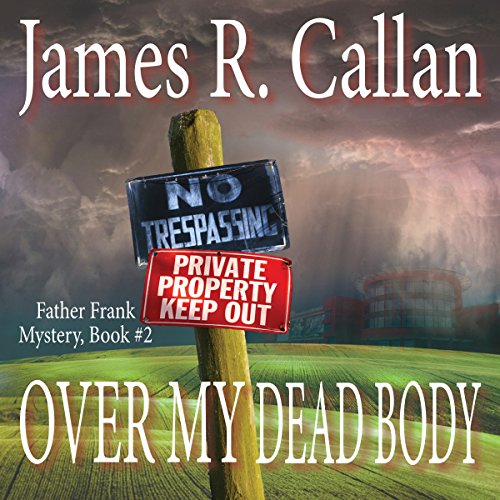 Over My Dead Body

By: James R. Callan
Narrated by: Jonathan Mumm
Try for $0.00

A large corporation is seizing land by eminent domain. Syd Cranzler stands in its way, threatening a court battle. After a heated meeting with the corporation representative, Syd is found dead from an overdose of heart medication. The police call it suicide. Case closed.

But Father Frank, Syd's pastor, and Georgia Peitz, another member of his church, don't believe Syd committed suicide and begin to look for clues of what really happened. Will this affect Georgia's romantic interest in the lead detective?

When the priest is almost poisoned, they convince the police to investigate further. Immediately, Father Frank becomes the target of rumors and speculation he might have had something to do with Syd's death.

The more clues Father Frank and Georgia uncover, the more danger they find themselves in. Can they find the real killer before they become victims?

What listeners say about Over My Dead Body

Several things really appealed to me in this story. I liked Father Frank as a priest and an amateur sleuth, along with his friend Georgia. The relationship between Georgia and Mike, the local police detective, was fun and made them likable characters. The mystery of who killed Syd Cranzier is well-plotted and there are plenty of suspects to keep readers guessing. What bothered me a bit was the introduction of Maggie, Father Frank's sister, late into the story and the repetition of some sleuthing that Georgia had already done.

Other than that, I found this a solid, enjoyable story.

The narration was good for the most part, but there were some characters that spoke with accents that were not easy to listen to.