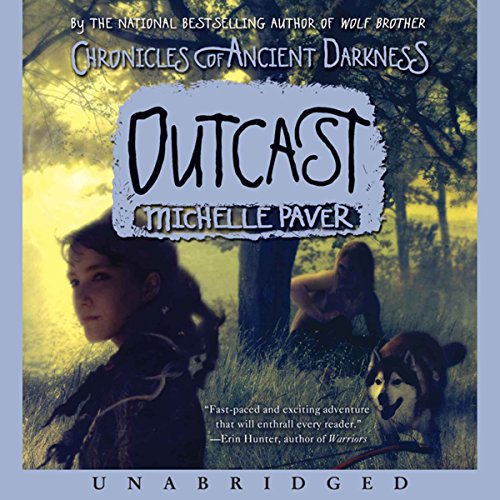 By: Michelle Paver
Narrated by: Ian McKellen
Try for $0.00

Torak crouched on a beach of black sand, his clothes in tatters, his face wild and hopeless as he lashed out with a flaming brand - lashed out at Wolf.

For two moons, Torak has hidden a terrible secret - and now it is revealed. He bears the mark of the Soul-Eater and must pay the price. Cast out from the clans, he is alone and on the run - cut off from his best friend, Renn, and his beloved pack-brother, Wolf.

In the haunted reed-beds of Lake Axehead he is hunted by the Otter Clan and taunted by the Hidden People and, as soul-sickness claims him, falls prey to an even greater menace. Tormented by secrets and broken trust, he uncovers a deception that will turn his world upside down.

Outcast is a thrilling story of friendship, survival, and the need to belong. Like all the books in the Chronicles of Ancient Darkness, Outcast explores the complexities of an ancient world filled with good and evil.

What listeners say about Outcast

Secrets and those that can ferret out secrets. Acceptance and rejection and acceptance. Torak's (and Ren's) sleep must be filled with horrific nightmares. Like the whole series, it is intense and fast paced. I am just glad it was them and not me. Though Paver teaches a lot about surviving in that wilderness, I would not want to have to try out that knowledge in a test of survival in any wilderness, not even now that I know what a lingonberry is.

With Sir Ian as narrator you KNOW you're in for a real treat, and he never let's you down! The descriptions of the Wolf, birds, animals and forest are so adopt on its easy to become quickly enchanted. Love the characters as well.

My 6-year-old and I love this series!

I think it is intended for an older audience, and is pretty scary in places, but we've had a great time with this story and all the details of day to day life in the old days - wilderness survival stuff. The reader is fantastic and that makes a lot of difference too.