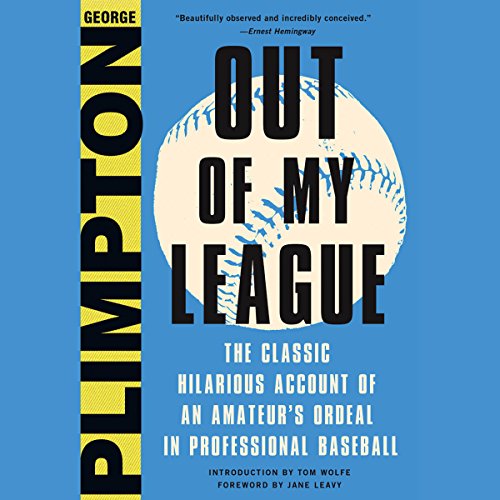 Out of My League

The baseball classic that Ernest Hemingway called "beautifully observed and incredibly conceived", now recorded and including a foreword from Jane Leavy.

The first of Plimpton's remarkable forays into participatory journalism, Out of My League chronicles with wit, charm, and grace what happens when a self-professed amateur has the chance to answer every fan's question: could he strike out a major league star?

Plimpton's inspired idea - to get on the mound and pitch a few innings to the All-Stars of the American and National Leagues - begins as a fun-filled stunt and comes to a deeply hellish, nearly humiliating end. This honest and hilarious tale features Mickey Mantle, Willie Mays, Whitey Ford, Ralph Houk, and other baseball greats and is "a baseball book such as no one else ever wrote, and one of the best ever". (New York Herald Tribune)

"Beautifully observed and incredibly conceived, this account of a self-imposed ordeal has the chilling quality of a true nightmare. It is the dark side of the moon of Walter Mitty." (Ernest Hemingway)
" Out of My League copes with the problem of the imaginary nightmare of walking every batter and the glittering triumph (the shutout) of striking them out, one after the other." (Marianne Moore)

What listeners say about Out of My League

You Cannot Go Wrong With Plimpton

Plimpton was good. Super good. He reads like Fitzgerald. So, in a way, and this is a leap mind you, consider this: Nick Carraway decides to take it upon himself to experience what it’s like to pitch in the majors. And, in classic scholarly fashion, he’s unaware that he’s ill-prepared.

Loved it. Plimpton's writing is exquisite, especially if you're a baseball fan. The narrator is fantastic, not just with the author's voice but with the voices of the various characters sprinkled throughout the book. It will be done before you're ready for it to end.