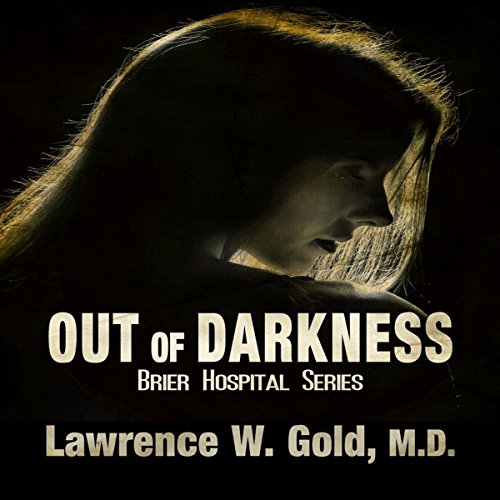 Despite the subject matter, this is an inspirational novel. It's is a fantastic opportunity for a talented actor.

Out of Darkness deals with the abhorrent problem of human trafficking, the fastest growing criminal enterprise in the 21st century, ranking second after drug smuggling. There are more young American girls entering the commercial sex industry; an estimated 300,000 at this moment; and their ages have been dropping drastically; the average starting age is an alarming 13.

Out of Darkness follows Cynthia Lange from despair; her mother selling her into sexual slavery, to her rescue by the FBI, and her difficult transition to prominent physician at Brier Hospital in Berkeley, California. While she had escaped from the life; she can't rid herself from its aftereffects. She deals bravely with them and begins a new life. While the FBI created legend obscures her past, circumstances threaten to reveal the truth and destroy all she had worked so hard to create. We discover in this novel that the human spirit can triumph over evil.

What listeners say about Out of Darkness

I DNF'd this audiobook around the 60% mark. It was just okay before that, but there was a line that set me off and I couldn't deal with it anymore.

The reason I picked up this book is because of the relevancy of sex trafficking right now. I went into this audiobook with the belief that sex trafficking would be the central theme in this story, but it took a while to even get to that part in the book. The author instead focused a lot on hospital politics in Part 1, which I honestly didn't care that much about. Hospital politics can be addressed, but I think it was a little heavy handed. The author also was heavy handed on feminism, progressivism, and conservatism. I honestly can't tell which area he supports, but it almost seems like he's done caricatures of each issue.

I feel like the author could have expanded more on the characters and made more of a connection for the reader, especially with Summer's plight and Cynthia's similar history. There just isn't enough emotional depth there for me with a subject that should be incredibly emotional. Cynthia reliving her experience was horrible, but that emotional impact really only appeared in those scenes. The characters were not very well developed and the dialog often came across as stilted.

One big sticking point for me was the fact that nobody called Summer's "employment" (or Cynthia's for that matter) what it was: rape. If she's 13 then she can't consent to anything. The fact that the hospital staff won't name it as such and keeps calling it work is troublesome.

Despite all this, I continued listening to the audiobook because it wasn't horrible. I held hope that it could still pick up. But I said enough was enough (well, what I really said out loud can't be repeated) when Cynthia's love interest implied that the number of sex partners she had did not make her suitable for him. I'm paraphrasing, but it was something like, "I knew you weren't a virgin but I didn't expect this." Remember, the vast majority of those men were non-consensual sex partners. As in she was raped. As in she was 13 and younger when all those assaults occurred. As in her worth as a woman, as a person, was determined by how many (or how few) sex partners she had in her life. Now, I'm pretty sure that Cynthia and her friend Harmony quickly countered this mindset- I vaguely heard something as I raged at my speaker - but I was so angry at the love interest's comments that I no longer cared. It was the straw that broke the camel's back for me.

I will address the narrator and quality of the audiobook. The narrator, Leigh Townes, isn't horrible. She could work a little on her voices, especially for men, as they aren't distinguishable from one another. My bigger issue is the production of the audiobook. The most noticeable problems are the times when there is clear audio spliced together with audio that sounds as if the narrator is in a tunnel, the odd skips, and the uneven pauses between chapters. That falls on the production crew. The editing done by the production team is B effort at best.

The writing of this audiobook is very unpolished and amateurish. The characters aren't well developed. There's insufficient foundation and background for many of the characters and events in the story. The dialog is sometimes incomprehensible. Basically, the book is in dire need of a competent editor.

For example, there are several contradictions in the age of the main character. In the prologue, she gives her age as 13 years, 1 month and 20 days on July 6, 1994. Later, it's stated that she's 44 in 2015, and much later in the story, she says she was born in January of 1981. It's obvious that neither the author nor the editor are paying attention.

Leigh Townes performs well, but she needs to voice some of the characters with more distinction. I'm especially impressed with her southern accent. Unfortunately, there are several production errors in the audiobook, i.e., missing or garbled text and one loud and startling noise artifact.

The story is engaging, but predictable. It could have been so much better.

I really enjoyed this book but I would have liked more detail in some areas. I felt like it was lacking in some things that could have been expanded on to bring more to the story. The narration was good and overall, it was a very good book. I was voluntarily provided this review copy audiobook at no charge by the author, publisher and/or narrator


This is a good, empowering story that I really enjoyed. My only complaint is the level of detail changes so much. For someone in the medical field the things happening in the hospital are likely easy to decipher and figure out, however as an IT Professional for example I have no idea if the "Systolic BP is 79" comment during a surgery is bad, or terrible, (given the context I know it's not good but that's it). Procedures are frequently talked about in medical terms, however for the non-medical person I have no idea what they are and I tended to blank out sections of the book because of this. .

On the other side of the coin, we have things like a kidnapping that seem to be completely glazed over with NO detail given. It's like an action movie that skips the action, just implies that it happened off camera. Police raid just 'happens' with little to no detail. Seems odd to leave those bits of excitement/danger out.