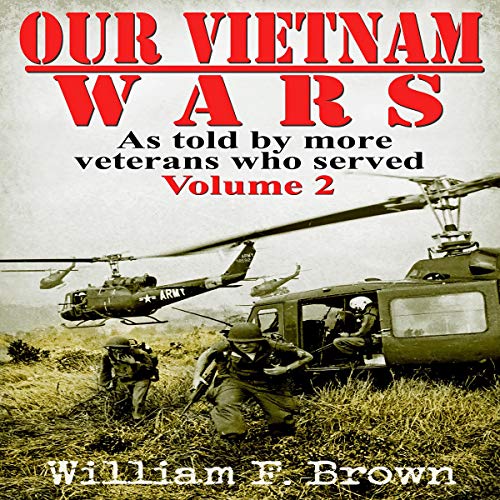 By: William F. Brown
Narrated by: Eddie Frierson
Try for $0.00

From a Marine sniper in Hue, to a medevac dust-off pilot going into a hot LZ, Navy Corpsmen, A-6 pilots taking out bridges and SAM sites in North Vietnam, a nurse on the USS Repose, combat medics deep in the jungle, machine gunners in I-Corps, mechanics working on the rolling deck of a big carrier on Yankee Station, squad leaders on infantry sweeps in “the Arizona Territory”, truck convoys under fire, riverine patrol boats in the Delta, Coast Guard “Jolly Green” search and rescue helicopters pulling downed pilots from the jungle, tank platoons in an all-out armor assault, Loach pilots in hunter-killer teams, and many more - from the Delta to the DMZ, this book puts you in their boots.

Some of us were drafted. Some enlisted. Some were true war heroes, but most were just trying to survive. As everyone “in-country” knew, Vietnam was all about luck, good or bad. If you were there, you understand. If you weren’t, grab a copy and start listening, anywhere in the book. The stories are like Doritos. Try a few and you won’t be able to stop.

The Vietnam War was the seminal event of my generation and affected so many lives. Over 58,200 of us paid the ultimate price, but the war didn’t end when the last US helicopter lifted off from the roof of the US Embassy in Saigon. It continues to take its ugly toll on many who did come home. Instead of bands and parades, we got PTSD and Agent Orange, diabetes, ischemic heart disease, neuropathy, leukemia, Hodgkin’s Disease, and prostate cancer, and many more. As they say, “Vietnam is the gift that keeps on giving.”

Unfortunately, what little our kids and grandkids know of the war comes from books that only focus on one soldier, one unit, and one year, or movies like Oliver Stone’s Platoon and Hamburger Hill, leaving people to think that all we did was crawl through the jungle on the Cambodian border smoking dope. But that wasn’t how most of us spent our year. In February, I published Volume 1. Due to the amazing response it received from vets and their families, I’m publishing Volume 2, with even more interesting, exciting, and informative stories. Hopefully, they will help correct that narrative.

William F. Brown is the author of nine action adventure and suspense novels on Kindle, including the highly successful Bob Burke series, and Our Vietnam Wars, Volumes 1 and 2, personal stories of the veterans who served there. His ministry and suspense novels include The Undertaker, Amongst My Enemies, Thursday at Noon, Aim True, My Brothers, Winner Lose All, and The Cold War Trilogy, as well as Burke’s War, Burke’s Gamble, and Burke’s Revenge. Enjoy!

What listeners say about Our Vietnam Wars, Volume 2

I thoroughly enjoyed learning more about the Vietnam War through those who experienced it “up close and personal.” I can’t even fathom how much hard work went into putting these interviews together in book and audible format. Mr. Brown, you have done your Country a tremendous service for not only serving it, but by serving your fellow brothers...

This contains a glimpse of what some what some actual participants can tell of their memories of the Vietnam War. They did their best but returned home condemned by people who did not try to understand. They were unable to share experiences like previous warriors and never got a thank you until recently. What you hear is in many cases the first time many have said anything about that time. We must never forget that they sacrificed a good portion of their lives serving. We must NEVER AGAIN make young people pawns in the hands of politicians who cannot decide if they want a hill or not in war!!

When we elect someone, it is our responsibility to make sure that we elect someone who will always remember that wars are fought by real people. Our warriors are young and war is not pretty. When we elect someone, we give them the power to send our young people to war. We must never give someone that kind of power that does not understand the sacrifice being asked of our youth! Many gave everything they could when our Country asked them to fight. May we never forget their lost innocence.